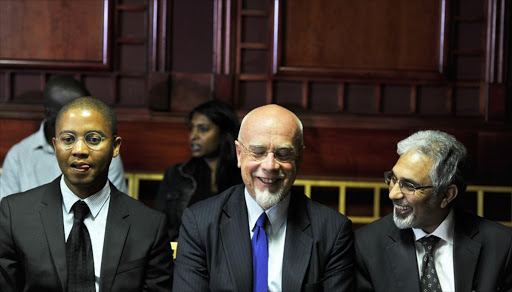 Auditing firm KPMG should make full and frank disclosure about its past conduct and institute credible initiatives to make right the harm that was caused to numerous individuals‚ public institutions‚ the country and the economy.

The four‚ in response to a request from KPMG‚ met the leadership of KMPG South Africa‚ led by its new CEO Nhlamu Dlomu‚ and with members of KPMG International.

The four said the meeting was without prejudice and they reserved their legal rights as parties who were adversely affected by the work of KMPG on behalf of its client‚ the SARS.

“Today’s was a preliminary‚ first meeting. We appreciate the efforts by KPMG to finally afford those affected by the ‘forensic’ investigative report to SARS‚ the opportunity to be heard.”

Two weeks ago‚ KPMG withdrew all of its findings‚ recommendations and conclusions around its report into the SARS "rogue spy unit".

The report was partly instrumental in the downfall of former finance minister Pravin Gordhan‚ who was accused of knowing and endorsing the "rogue unit".

Allegations around the unit's work led to Gordhan‚ who was SARS commissioner at the time‚ being criminally charged‚ with the Hawks pursuing a determined criminal battle against him.

The four former officials said they remained convinced that KPMG’s conduct had caused immense harm to a number of experienced individuals‚ their reputations and careers as public servants‚ and it damaged institutions like SARS.

“We believe KPMG should make full and frank disclosure about their past conduct and institute credible initiatives to make right the harm that was caused to numerous individuals‚ to public institutions‚ to our country and the economy‚” they said in a statement.

They said in their view‚ the “findings” of the KPMG “forensic report” to SARS‚ became the basis for the aborted criminal prosecution of Gordhan‚ former SARS deputy commissioner Pillay and others during October 2016.

“The decision by the National Director of Public Prosecutions to issue summons against these individuals‚ and against Mr Gordhan in particular‚ days before the October 2016 Medium Term Budget Policy Statement‚ caused intractable economic harm and uncertainty.”

They said the allegations that a covert and rogue intelligence unit was established by SARS in contravention of the rule of law had been substantially disavowed.

“As this aspect was the central focus of the ‘forensic report’ to SARS‚ we trust that this report will in future be withdrawn in full.”

KPMG feels curse of the Guptas

At least 21 companies out of about 66 JSE-listed firms which use KPMG South Africa as their auditor confirmed this week that there was an internal ...
Business Times
4 years ago

Tears and trauma at KPMG over Gupta scandal

ANDILE KHUMALO: Ups and downs of a Compromised Accountant career

No rehabilitation for KPMG without full disclosure of SARS manoeuvring

Auditing has long been one of the professions held in the highest regard in our country, with many top matriculants choosing it as their field of ...
Opinion & Analysis
4 years ago

KPMG scandal: Why is SA a magnet for miscreants?

Bell Pottinger, having greedily grabbed the Guptas' grubby millions - more like a python that has swallowed an unusually gargantuan prey - is now ...
Opinion & Analysis
4 years ago

Lessons from KPMG: be on guard, South Africans are on your case

Moses came down from the mount with tablets inscribed with 10 commandments.
News
4 years ago