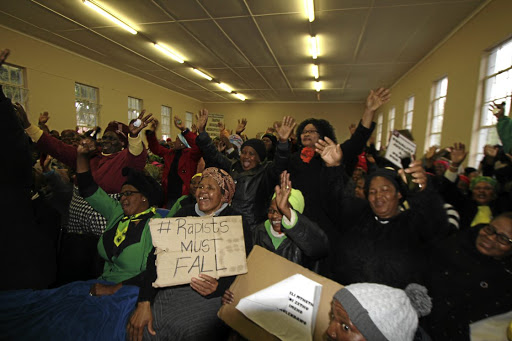 JUSTICE DONE Residents of Emalahleni municipality are among groups celebrating the release of a woman who stabbed her daughter's alleged rapists
Image: Tembile Sgqolana

An Eastern Cape mother who admitted to stabbing her daughter's alleged rapists, killing one man and injuring two others, left the Lady Frere Magistrate's Court a hero and a free woman after the National Prosecuting Authority opted not to press charges against her.

The 56-year-old mother stabbed the alleged rapists on September 2 at an unoccupied house in the Qumbu administrative area in Zwartwater near Komani.

She was arrested and released on R500 bail facing murder and attempted murder charges.

She cannot be named in order to protect the identity of her 27-year-old daughter.

Prosecutor Fikile Seti told magistrate Bala Mhlangu the director of public prosecutions had told him to withdraw charges against the woman, referred to as the "Lion Mama".

Seti did not give reasons for the decision.

Those in the packed court room rejoiced.

An Eastern Cape woman has stabbed a man to death and wounded two others‚ allegedly when she found them gang-raping her 27-year-old daughter.
News
3 years ago

Addressing hundreds of her supporters outside court, the mother said she was overwhelmed by the support.

"I felt like an old baboon that has no friends, but today you showed me I have people and that I was not alone. Thank you.

"I am happy that the charges are withdrawn against me and I thought I was going to jail, but God was on my side."

She said when she stepped into the dock, she never thought charges would be withdrawn. "I was afraid but with the support of the people outside the court and those who filled the court, I was strong," she said.

Since the Lion Mama's story spread, South Africans rallied behind her to pledge financial and emotional support.

Cape Town resident Natalie Kendrick set up a generosity page which helped crowdfund over R133,000 which was meant to help with her legal fees.

Her attorney Buhle Tonise said the money raised for the woman would be used for her wellbeing.

"She still needs to go for trauma counselling for her and her daughter. We have transferred the money that was paid to us to her for her wellbeing," Tonise said.

"She said she wants a fence and another room for her daughter. She also asked for assistance with managing her money as she has never had that amount of money. She wants assistance on how to save the money."

The two men whom the woman stabbed remain in police custody and are facing charges of rape.