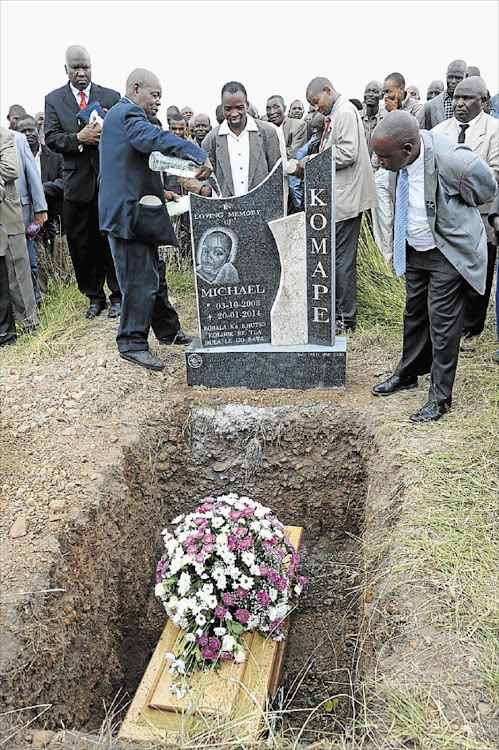 The funeral of Michael Komape, who fell into and died in the pit toilet at his school in a village in Limpopo
Image: Supplied

The civil lawsuit against the State over the death of a six year-old Limpopo boy who drowned in a pit latrine got underway at the High Court in Polokwane on Monday.

The parents of Michael Komape‚ a Grade R pupil from Chebeng Village‚ filed a R3-million lawsuit against Minister of Basic Education Angie Motshekga‚ after their son was killed on 20 January 2014.

Michael‚ a pupil at Mahlodumela Primary School‚ fell to his death and drowned in human excrement. His tragic death sparked outrage‚ resulting in residents in the area demolishing the toilets at the school.

Michael's parents‚ James and Rosina Komape‚ filed the lawsuit in 2015‚ demanding that the department pay them damages because the latrine was dilapidated and not fit for human use. The department filed court papers in response‚ denying any responsibility in the boy’s death.

“It is denied that any constitutional rights of the learners attending school in Limpopo province have been infringed‚ or [that] there is any future threat of infringement of their rights‚” the court papers read.

Michael Komape drowned in human faeces. He went out of the classroom to answer the call of nature and never returned.
Opinion & Analysis
4 years ago

In recent years‚ Michael’s death has drawn attention to the plight of pupils in rural schools subjected to poor sanitation standards. The South African Human Rights Commission also dedicated its 2014 report on “The Right to Access Sufficient Water and Decent Sanitation in South Africa” to Michael.

During the months leading up to the court case‚ civil organisation Section 27 – which is assisting Michael’s parents – ran a vocal campaign under the hashtags #Justice4Michael‚ #StandwithMichael and #FixLimpopoSanitationNow.