Exams in a tent for UCT

Security: The plan is designed to ensure tests are concluded in a safe, quiet and calm atmosphere 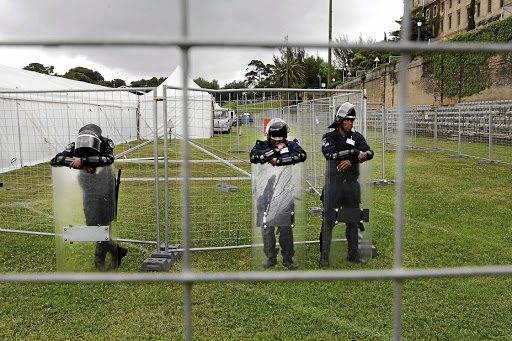 In an attempt to ensure peaceful exams, the protest-hit University of Cape Town has erected an enormous tent on its rugby field where students will write their final exams under police guard.

The police, private security guards and campus security officers will patrol the area around the tent to protect those writing exams from violent protests that have hit the campus in the past few weeks.

UCT's decision to transform its rugby fields for examinations starting on Wednesday was scoffed at on social media, but university spokesman Elijah Moholola said: "The plan is designed to ensure exams are concluded in a safe, quiet and calm atmosphere."

He said access to the venue and surrounding areas was strictly controlled.

"The executive [has] previously expressed regret that security had to be deployed to such an extent on campus to secure the exam venue. Staff and students should expect increased visibility of security measures around the exam venue. Unfortunately, there is no alternative," Moholola said.

With final exams around the corner and the perennial study grind making memorisation a very difficult task‚ the University of the Western Cape (UWC) ...
News
4 years ago

Seipati Tshabalala tweeted: "I refuse to write my **Final** exams in a tent with dogs patrolling me! I refuse to carry a student card for random spot checks of my identity. Apartheid is supposedly over so I refuse to be subjected to this rubbish in 2017!!"

"I don't know whether to cry or laugh at UCT's idea of writing exams at the rugby fields. Somehow I just believe writing an exam in a tent is not as safe, quiet and calm as the management would claim. Let's wait and see," posted Khangwelo Matodzi.

Protesters have clashed with police on the UCT campus.

President Jacob Zuma on Monday released a report into the feasibility of no fees, but he has yet to make a pronouncement on it.

Cape Peninsula University of Technology spokesman Lauren Kansley said for the past two weeks the campus had been relatively quiet following a tumultuous period of student protests.

"For the entire month of November, we have been incident-free, and we haven't had the need to increase our security."

University of the Western Cape spokesman Luthando Tyhalibongo said the new student representative council had promised a peaceful end to the academic year.