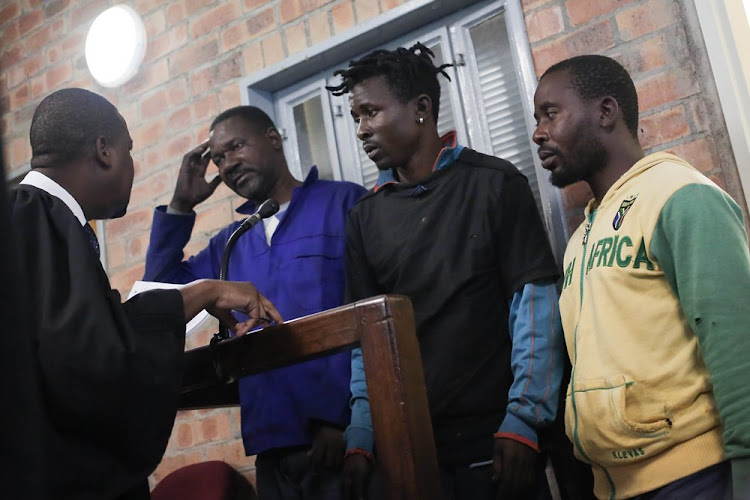 Walter Mhangani, Emmanuel Mdhuli and Xongani Mathebula appear in the Skukuza Regoinal Court in the Kruger National Park. The three were arrested after poaching three Rhino in the park on Sunday.
Image: Alaister Russell/The Times

Three suspected rhino poachers have appeared at Skukuza regional court and will be remanded in custody until December 4‚ after they were arrested at Kruger National Park on Sunday.

The three men‚ Walter Mhangani‚ 55‚ Emmanuel Mdhuli‚ 29 and Xongani Mathebula‚ a Mozambican international whose age is unknown‚ briefly appeared before Magistrate Vicey Marule where they heard charges of trespassing‚ possessiom of an unlicensed firearm‚ conspiracy to commit an offense‚ possession of firearms with intent to commit crime and possession of unlicensed ammunition‚ among others.

The state told the court that they intend to oppose bail for the suspects.

The three men allegedly killed one white adult rhino in the Watergat area and shot and killed two others in Skukuza‚ Mpumalanga‚ on Sunday. They were apprehended by rangers who were not far from the scene‚ after they had heard gunshots.

Khanyi Mbau is set to add to her acting resume with a role on an upcoming film from Leon Schuster centered around the scourge of rhino poaching in ...
TshisaLIVE
4 years ago

"We found the horns of this animal in possession of those three suspects so we will link those horns and weapons to this crime scene. We should have a fairly strong case. Unfortunately‚ those suspects shot two more rhino about two kilometers from here (Skukuza). They couldn't remove the horns from them because the rangers arrested them before they could‚" said Frik Rossouw‚ senior investigator for SanParks.

"I'm happy and satisfied that we will be able to at least link the horns that were found in their possession so the chances of these guys getting off [the hook] are not very good.

"These arrested suspects are local people and not from Mozambique as we have been made to believe‚ even though some are. These people are from our communities and I think you guys can help us a lot by identifying them and assisting us‚" added Rossouw in a call to the public.

A police official who was at the crime scene told TimesLIVE that they found three horns in possession of the suspects‚ one unlicensed firearm and five unused bullets‚ a knife and one axe.

The official revealed that the suspects are from Belfast and Mkhuhlu‚ near Hazyview‚ Mpumalanga.

A local chief of the community said poaching had a knock-on effect in unemployment of community members. "I'm saddened and worried that people can be this cruel to do this to these animals. When tourists come to South Africa‚ all they want to see is our 'big five' and if one of those is being killed‚ I feel sad. When tourists come to our area‚ they create employment because the park employs many of our people around here‚" said Chief Mathibela Mokoena.

To date‚ more than 90 suspects have been arrested in connection to rhino poaching.