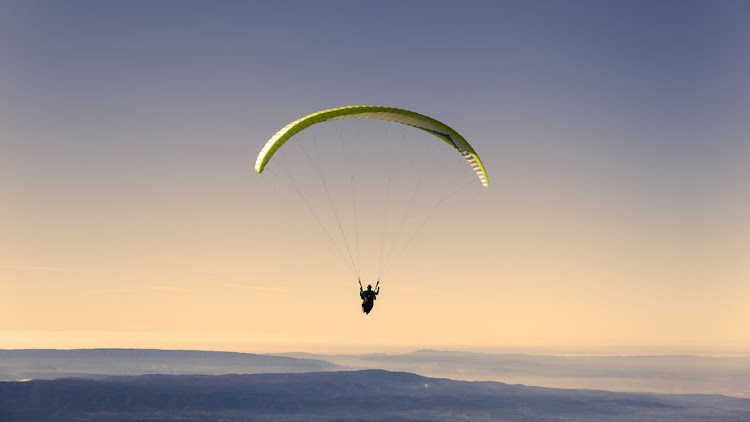 Competition spokesman Ian Cowie said the pilot was approaching the “goal field” in Eendekuil after a 68km flight from Porterville on Friday when he hit “extreme turbulence”.
Image: 123RF/Aurelien LAFORET

One of the world’s top paragliders was killed during a competition in the Western Cape.

Competition spokesman Ian Cowie said the pilot was approaching the “goal field” in Eendekuil after a 68km flight from Porterville on Friday when he hit “extreme turbulence”.

This would have caused his glider to collapse‚ sending him plunging to the ground‚ said Cowie.

He said an investigation would be conducted by the South African Hang-gliding and Paragliding Association and the Civil Aviation Authority. The identity of the dead pilot would be released once his embassy confirmed that his family had been informed.

“All I can say for now is that he was a top international pilot. He would have been on the podium in one of our five classes‚” said Cowie.

Cowie said the pilot reached hospital in Piketberg within an hour of the crash‚ and doctors — assisted by advance life-support paramedics from a helicopter and the ambulance that transported him — attempted to resuscitate him for 90 minutes.

Saturday’s final day of the seven-day South African Pre-PWC Porterville Paragliding Open‚ which attracted 120 pilots from around the world — including world champion Aaron Durogati‚ from Italy — was cancelled as a mark of respect to the accident victim.

Cowie said that until Friday’s accident‚ the competition had “met and exceeded our expectations”. This was despite the fact that the El Niño effect - also responsible for the drought crippling the Western Cape - had introduced challenging conditions at Porterville‚ known as Africa’s premier summer flying and cross-country competition site.

He said two witnesses who watched the entire incident in which the pilot was killed would give evidence to the inquiry.