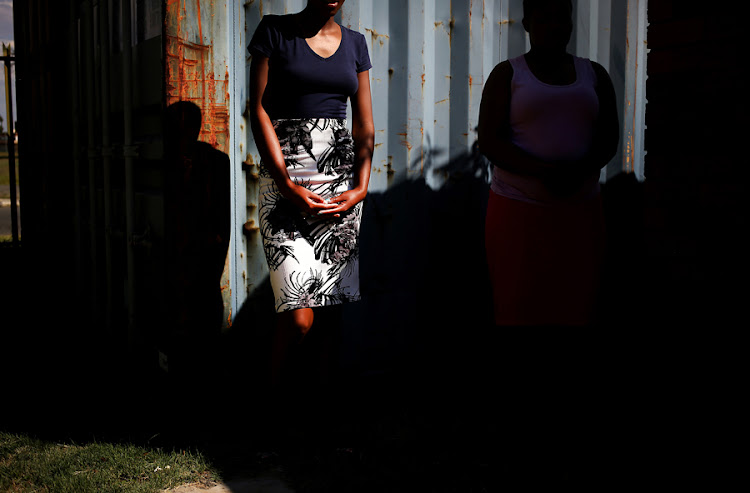 Two woman Margaret and Doris (NOT THEIR REAL NAMES), who are believed to have been trafficked, pose for an anonymous picture. Ten people including those from Lesotho and South Africa were found and rescued from the farm, near Welkom, in The Free State. Six suspects were arrested for alleged human trafficking.
Image: ALON SKUY

She sits silently on a chair‚ hands clenched‚ eyes wide. Margaret* looks around her‚ frightened‚ unsure of where she is or whom she can trust.

It's been just three days since she was rescued from a Free State farmhouse by an elite police unit. The house is one of dozens of properties owned by a Welkom businessman – the alleged mastermind of an international human trafficking ring.

Margaret had just finished school when she was brought to South Africa under the alleged pretext of becoming a cleaner‚ hundreds of kilometres from her rural Lesotho home.

Her rescue by Hawks officers occurred just hours before she was allegedly to become a sex slave at one of the lodges and remote farms operated in and outside of the town by a syndicate.

Margaret said when she arrived in Welkom she was taken to a lodge where she was greeted by the kingpin's wife. As she was settling in‚ police raided the lodge and arrested several suspects.

"I had no idea. When the police told me what was happening‚ I was scared to hear what was going to happen to me.

"I thought I was coming for a legitimate job."

Doris*‚ who was rescued along with her two cousins‚ was about to be sold off as a slave. Doris and her cousins had been brought from Bloemfontein after their aunt told them of a woman looking for cleaning staff. The thought of what could have happened leaves her cold.

"We were welcomed at the lodge by a white lady. She showed us around‚ and then we were split up. Another woman came to watch over me‚" Doris said.

A whistleblower's call for help to his wife in Lesotho has exposed the operations of a sophisticated international slave trade syndicate.
News
4 years ago

"They didn't say where my cousins were going‚ just that they had to work elsewhere."

She said when she saw her cousin with police‚ who had rescued her from another lodge‚ she became frightened.

"I didn't know what was happening. The police asked us who we were and where the owner was. They told us why they were there and explained what was about to happen to us‚ and what we would have had to do.

"Had it not been for God‚ those people would have done all those things to us. I thought I was coming here to earn money for my child‚ but instead it was for something else."

David* arrived in South Africa last week‚ with the promise of work as a shop assistant in the Free State mining town of Welkom. Instead‚ with the threat of violence and death hanging over him‚ he ...

Six suspects have been arrested for alleged human trafficking in the Free State‚ the Hawks said on Friday.
News
4 years ago