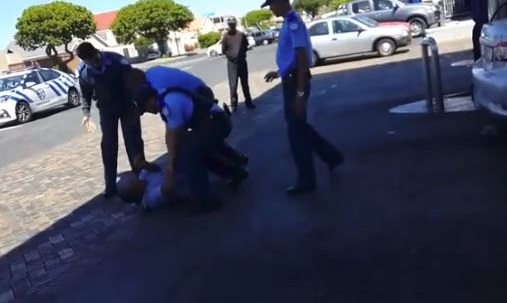 Authorities are investigating a case of brutality against traffic police officers who dragged a 51-year-old motorist from his car and had him locked up in a police cell.

Analytical lab assistant Bashiera Allie posted video footage of the incident - which occurred on Monday in Mountview - on Facebook which went viral.

In a second video the motorist explains what happened when he is visited in a police cell.

The Voice of the Cape reported that Zainodien Allie had gone to assist his uncle who was being questioned by traffic police for allegedly using his phone while driving. Allie was accused of interfering and ordered out of his car by traffic police who tried to remove the key. What happened next was captured on video.

Zaahira Allie said her father was injured and then locked up in a police cell. Charges against him were dropped when he appeared in court the next day.

Cape Town’s Mayco Member for Safety and Security‚ and Social Services‚ JP Smith‚ said on Wednesday that an allegation of police brutality was under investigation.

“The City of Cape Town has been made aware of footage where several of our traffic officers are involved in placing a person under arrest. The allegation is one of police brutality against our officers‚” he said.

“The City takes these allegations very seriously and the matter is receiving urgent attention‚ including a full investigation to determine what exactly happened.

“The overall conduct of the officers in terms of their behaviour at the scene‚ their professionalism‚ and compliance with the law will have to be determined. We will also have to get their side of the story.”

Witnesses were asked to come forward to help with the investigation.

“This investigation will be completed in addition to whatever criminal investigation the South African Police Service is conducting into the matter‚” said Smith.