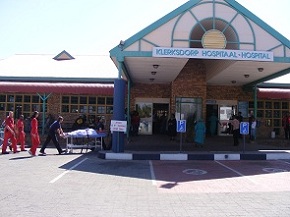 The situation has calmed down after ambulances and medical staff were prevented from entering the Tshepong hospital in Klerksdorp on Wednesday.

Dr Ebrahim Variava‚ who works at the hospital‚ said a patient died as they could not attend to the emergency.

“The patient‚ who was stabbed on the neck‚ ended up dying because we were blocked from attending to them. I am not sure if their injury was related to the strike. Another one with a gunshot wound survived because the [patients] were later transferred to another hospital when the protestors left‚” Variava said.

Variava said because they could not attend to some patients and had to turn them away‚ they will have to see them on Monday.

“As a contingency plan we had a helicopter drop staff into the hospital‚ but the protestors noticed and came in. They then dispersed the [staff] and chased them out of the hospital. Doctors were removed from wards even‚” he said.

He believes that the people engaged in these actions are a group of “opportunistic thugs”. Variava is pleading with the silent community members to help stop the lootings and disruption of health service provision.

The doctor said the intimidation and violence by the protestors has left young doctors in the hospital traumatised. “We have been doing this job so it’s not so heavy on us‚ but it’s been traumatising for young doctors. We will need to speak to them.”

A resident of Jouberton‚ who did not want to be named‚ said shops belonging to foreigners are being looted. “Last night around 21:30h the rampage went worse in different sections of our location. Tyres were burned on almost every street corner or fourway stop and they started looting Somali shops‚ robbing‚ beating and all sorts or wrong things happened overnight.

“This morning they went to the Choppies complex and looted it. These lunatics have succeeded. I guess the deployment of police was inadequate‚ as everywhere they went police came late. And police fired rubber bullets the whole night when we were sleeping‚” said the man.

Some of the shops looted were Lewis‚ OK furnishers and a pharmacy‚ he said. He said most of the looters were unemployed youth.

#Northwest Roads closed; blocked off - staff cannot enter Tshepong hospital. How are the acute, vulnerable patients being cared for? MSLA is urgently needed to ensure the care for such patients! @Bhekisisa_MG @Kegakilweg @NorthWestDOH @TAC @Stop_Stock_Outs

Its a damn mess and I have no idea what anyone is doing about all this.

You want a "thief" removed, you go on a "thieving" spree yourself? Only because #SupraMustFall #Klerksdorp is out of order💔💔💔😢😢. How does this help? pic.twitter.com/NnLQ7X2ekY

This supra strike thing is affecting our lives now at Klerksdorp, kanana,Orkney...our young bro's and sisters can't even go to schools,shots being fired😕, meanwhile there are #xenophobic attacks happening to innocent foreigners @eNCA @SupraMahumapelo .this must be dealt with