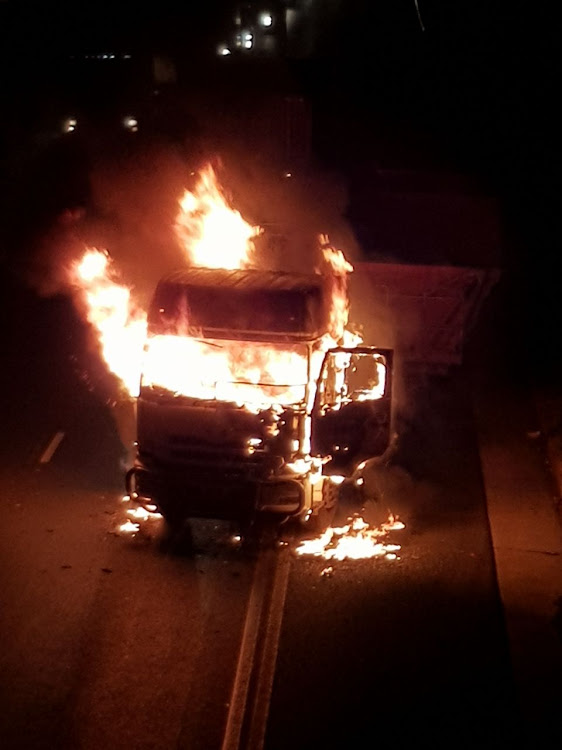 The N3 highway - the main road route between Johannesburg and Durban - was shut in both directions on Sunday night as protesters torched trucks. As many as 10 trucks had been set alight.
Image: SUPPLIED.

Authorities and business owners are counting the cost of a riotous night in Mooi River‚ as mobs looted and put the torch to as many as 20 trucks near the Mooi Plaza on Sunday.

Trucks were looted and set ablaze on the N3 as well as the R103‚ closing the major routes as traffic headed for Gauteng was set to surge as holiday makers return home after a long weekend.

On Monday morning the N3 remained closed as a large mop-up operation began to move burnt-out shells of truck bodies and trailers. Road authority N3 toll concession said on Monday morning that the recovery and clean-up was in progress.

Law enforcement sources close to the incident confirmed that police officers were engaged in running battles with rioters for most of the night. Members of the public order policing unit‚ as well as tactical detachments of the flying squad and dog unit‚ were called in from Pietermaritzburg. Sources reported that some officers came under fire from the crowds.

While the source of the consternation is veiled in mystery‚ the demonstrations may be linked to South African truck drivers who are upset that foreign nationals are being given jobs over them by haulage companies. This follows a similar incident over the Easter weekend when police engaged in running battles with looters. Trucks were looted and burned on both the N3 and the adjacent R103 in skirmishes that lasted nearly 24 hours.

Police spokespeople were not available for comment at the time of publishing.

A wave of civil disobedience which saw trucks torched has forced the closure of the N3 and the R103 at Mooi River on Sunday night.
News
3 years ago