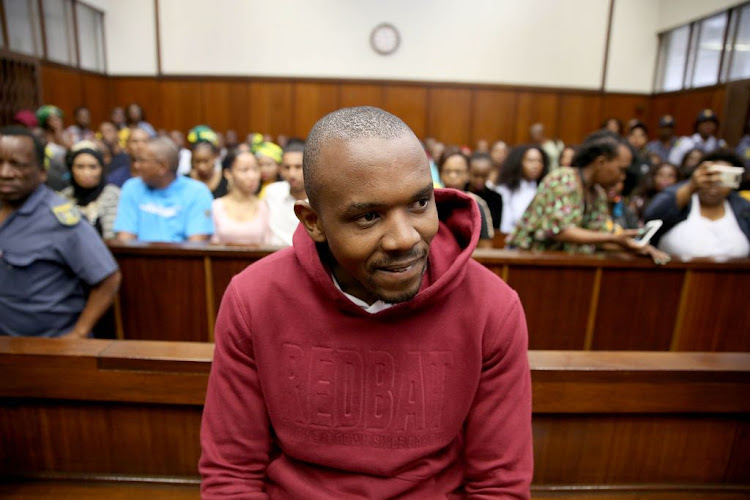 Thabani Mzolo smiled and made 'trigger signs' when he appeared in the Durban Regional Court on Thursday in connection with the brutal murder of Zolile Khumalo.

The 23-year-old is accused of shooting Khumalo‚ a student at the Mangosuthu University of Technology‚ inside her room late on Tuesday night. Mzolo allegedly signed in at a security post under a false name in order to gain entrance to the Lonsdale residence. Police confirmed that he was arrested at the scene‚ in possession of a pistol.

Mzolo grinned as he stepped into the dock waiting for the magistrate as a number of cameras zoomed onto him.

Khumalo and Mzolo had been in a relationship earlier‚ but had parted ways prior to their argument.

The prosecution team requested a seven-day remand‚ citing security concerns and the need for further investigation.

Mzolo pulled what appeared to be 'trigger signs' as he was escorted out of the court.

#Zolilekhumalo accused had been remanded in custody until May 10 for a bail outcome. He leaves court smiling and students believe the sign he made was of that pulling a trigger #watch @SundayTribuneSA pic.twitter.com/IeFup0rf5M

Hundreds of students gathered outside the courtroom in protest‚ having marched from residences in the city centre. Security and police barred the gates while negotiating with student leaders.

There is a tense stand-off between students and police outside the courthouse @yasantha @TimesLIVE #ZolileKhumalo pic.twitter.com/Pj56nRZpzE

News of Khumalo’s death broke on the same day Sandile Mantsoe was found guilty in the Johannesburg High Court of the 2017 murder of his girlfriend Karabo Mokoena. Mantsoe was sentenced to 32 years in jail on Thursday.