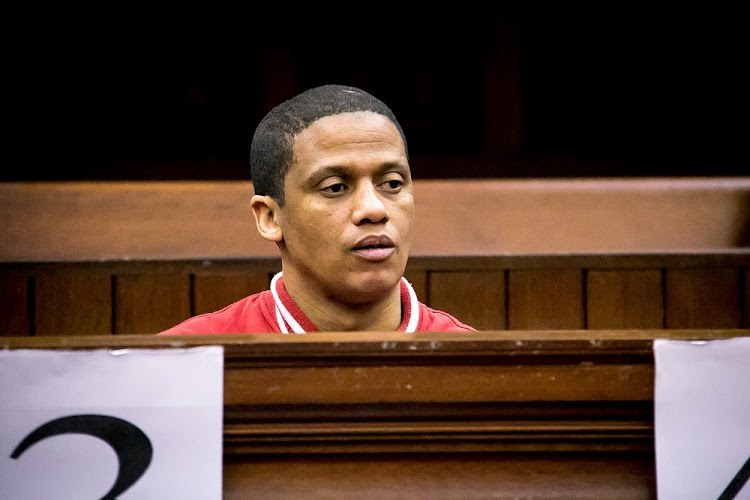 Mortimer Saunders, the man who confessed to killing three-year-old Courtney Pieters and performing a sexual act on her corpse.
Image: Anthony Molyneaux

“Captain‚ you must go behind the factories because there’s an open field where people walk through‚” said Pamela Scholtz‚ the Delft Neighbourhood Watch member who found three-year-old Courtney Pieters’ body during a search for the missing girl on May 13 2017.

Arriving at the site‚ Scholtz veered away from the search party.

“I went through a thorny field and walked along the factory fence‚ but I didn’t find anything. But while looking through the leaves‚ I suddenly saw Courtney … I saw the child laying there‚” said Scholtz before breaking down on the witness stand in the Cape Town High Court.

Judge Pearl Mantame adjourned the trial to allow Scholtz to gather herself.

Mortimer Saunders has admitted to killing Courtney and performing a sexual act on her corpse. However‚ he denies the crime was premeditated and says he did not rape the child before her death.

Saunders disposed of the child’s body in a field behind a factory near Pieters' home on Pluto Street in Elsies River‚ Cape Town.

Saunders now sits in the dock with a red and white baseball sweater‚ occasionally looking down at the floor and then at Scholtz.

When the case resumed‚ Scholtz continued: “A thorn bush was covering her body. I knew it was Courtney because her mother gave a description of the clothes Courtney had worn on the morning she went missing.

“[After finding the child] I just went to sit down. I was very emotional when I saw that girl there. When I came right again‚ I shouted 'hello' to get the attention of the search party.

“The police captain came over and he called the general and all the others to say we found the little body.”

Scholtz testified that Saunders was part of a search party looking for Courtney.

Courtney went missing on May 4 2017 after her mom left for work‚ leaving the three-year-old with Saunders‚ a tenant in their home. Her body was found nine days later.

The self-confessed murderer of three-year-old Courtney Pieters admitted on Monday that he killed her with ant poison and committed necrophilia.
News
3 years ago