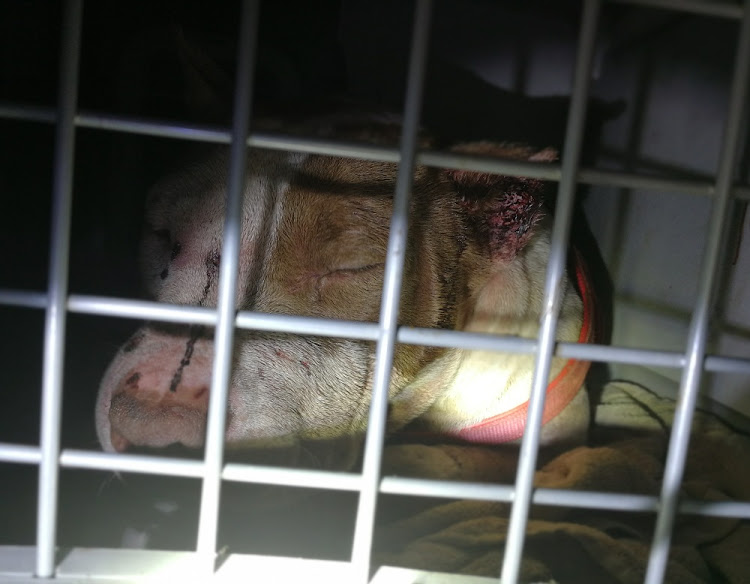 14 dogs in total were rescued in this operation and were taken to places of safety.
Image: NSPCA

Six people have been told they must stay in jail after appearing in court following their arrest in connection with a dog fight at the weekend.

The National Council of SPCAs (NSPCA) said in a media statement on Monday that the group was arrested in Atteridgeville‚ Pretoria‚ during a dog fight in the early hours of Saturday morning.

“Two dogs were writhing on the grass in a bloody battle while the dog-fighters and spectators laughed and shouted to the dogs‚” senior inspector Wendy Willson, manager of the NSPCA’s Special Investigations Unit said.

The NSPCA collaborated with the police in the investigation after receiving a tip-off from community members.

“The dog-fighters had gathered in an isolated area where they thought they were safe from detection.”

Fourteen dogs were rescued after the arrests.

Willson said: “It was chilling to see the callousness of these men and the delight they took in watching and encouraging these dogs to rip each other apart.”

The six have been charged with animal cruelty and dog-fighting‚ and appeared in the Atteridgeville Magistrate’s Court on Monday. They will remain in custody.

In February 2016‚ Kutso Kopanye‚ Reginald Khoza‚ Neo Dichabe and Reabetswe Sekhalo were found guilty and sentenced on July 11 2016 for participating in dog fights at Kopanye’s house in November and December 2013.

Good people choosing to ‘do something’ led to prosecutions for dog fighting: magistrate

“All it takes for the triumph of evil is for good people to do nothing‚ but in this case a lot of good people chose to do something.”
News
4 years ago

Four men were sentenced to two years in prison on Wednesday after a dog fight in 2013.
News
4 years ago