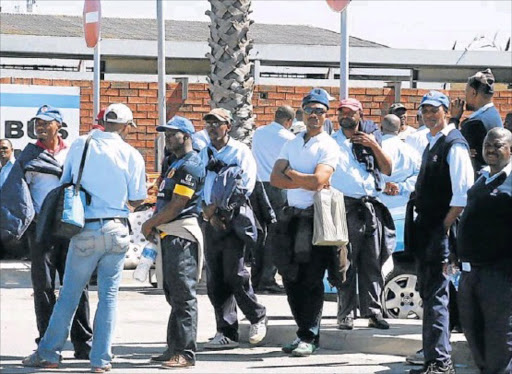 The South African Federation of Trade Unions (Saftu) says it is alarmed by reports that five bus companies have applied to be exempted from complying with a recent wage agreement that ended a crippling bus strike.

Algoa‚ Golden Arrow‚ Putco‚ Amogelang and Phumatra Transport Enterprise signed an agreement with unions after the 26-day strike‚ agreeing that workers would receive a 9% wage hike in the first year and 8% in 2019.

“Now they want the agreement declared unaffordable‚ unlawful‚ unfair and unconstitutional and are reported to be threatening to challenge it in the Constitutional Court‚” said Saftu in a statement.

“If this application succeeds‚ it could not only mark the end of collective bargaining in the bus industry but in the country as a whole - and shift the balance of power in the workplace even further in favour of employers than it is already‚” the federation warned.

Business Day said in an editorial on Monday that if large bus companies want to opt out of specific aspects of the wage agreement‚ it sends worrying signals about the likelihood of another bus strike. It also raised a red flag about the extent of pressure that the multi-employer collective bargaining system was under in South Africa.

Saftu said it was outrageous that bus company bosses‚ who received government subsidies when workers were on strike and not being paid‚ could reverse the gains achieved by workers who sacrificed their wages for four weeks under the “no work‚ no pay” rule.

Traditionally‚ smaller employers outside the bargaining councils have applied for exemptions as agreements reached with bigger players were unaffordable for smaller players.

“But if big companies which sign collective agreements can also argue for an exemption - claiming that financial difficulties prevent them from paying the agreed wages increases‚ or that the agreement they have just signed was unlawful and unfair - it will set a precedent for any employer to do the same‚ and make all collective bargaining a futile charade and waste of time - and lead to its collapse‚” said Saftu.

Johannesburg Metrobus has been struggling since Tuesday to transport thousands of commuters in the city due to a strike by the Democratic Municipal & ...
News
3 years ago

'No winners‚ only losers' after bus strike

Bus drivers who engaged in a national strike would have to work for up to year to recoup the month’s pay they lost because of the no-work-no-pay rule.
Business Times
3 years ago

It's official: The bus strike is over