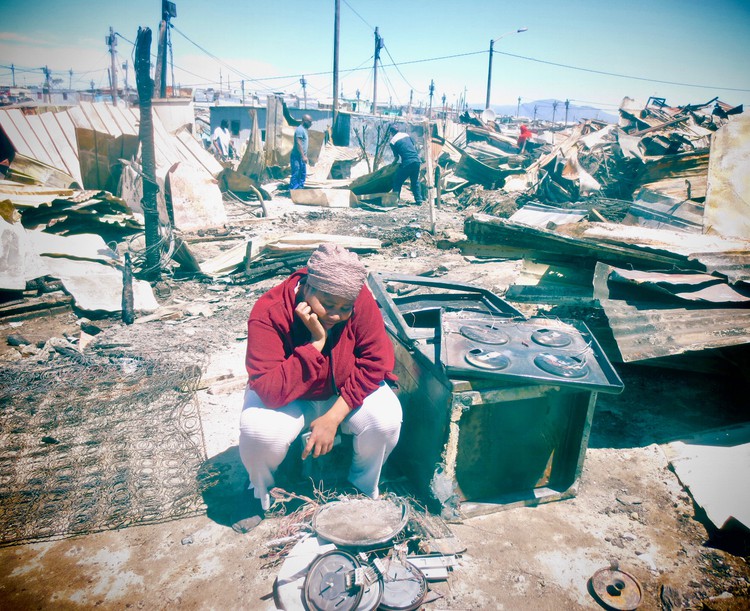 Fezeka Feni sits amongst the ruins of her former home in Kosovo informal settlement in Philippi after a fire in the area.
Image: Bernard Chiguvare

Spokesperson for the City of Cape Town’s disaster risk management centre‚ Mandy Thomas‚ says approximately 120 shacks were destroyed and 1‚400 people displaced in a fire that ripped through E52 Kosovo informal settlement‚ Philippi‚ in the early hours of Sunday morning.

The fire was reported at 3:16am‚ according to Edward Bosch from the city fire and rescue service. He says the cause of the fire is not yet known.

Sesethu Mgwebi‚ a matric learner at Zisukhanyo Secondary School in Philippi‚ had her hopes of passing matric with high marks dashed after all her textbooks and revision notes were burnt. Her school uniforms were also burnt. Mgwebi is due to start writing her final exams on Tuesday.

Sitting on a bench at the place she used to call home‚ Mgwebi said: “I had planned to do exam revision early on Sunday‚ but all my books and notes were burnt in the fire.”

If she passes matric‚ Mgwebi intends to enroll in a business management course next year.

Akhona Jezile and Thandiswa Ngambu‚ who are studying electrical engineering‚ started rebuilding their shack with zinc sheets and wooden planks they bought for R3‚500 from a nearby building material shop. They have lived in Kosovo since 2016.

“We could not wait for the city. We are not sure when they will come to assist us‚” said Jezile.

She said the fire brigade arrived late and struggled to access the area. “I think there must be roads in between shacks‚ so that in times of fires the fire brigade can quickly put out the fire‚” she said.

“This is the second time experiencing fire at this place. I have lost all my belongings‚” said Fezeka Feni‚ sitting on a burnt microwave.

“The city should build us brick houses. I cannot start rebuilding my shack now because I have no money for buying building material. I have to wait for the city.”

Feni has been living in the area since 2010. She lived with her three children in a shack divided into two rooms. “I hope friends or any well-wishers could bring us warm food today‚” she said.

Feni told GroundUp on Monday morning that city officials arrived to assess the area but had not brought any supplies.

Ward 88 councillor Siphiwa Nqamnduku said the affected people will be housed at Samora Machel library in the meantime. He said he hopes the city will provide assistance soon.

“My understanding is that the city is still busy with the Khayelitsha fire and I am not sure when they will come to this community‚” said Nqamnduku.

“The affected will go to the library that is within walking distance from [Kosovo] but it’s not a decent place.”

He encouraged the community to use available resources to rebuild their shacks and suggested that the city builds brick houses as a lasting solution for fires such as this.