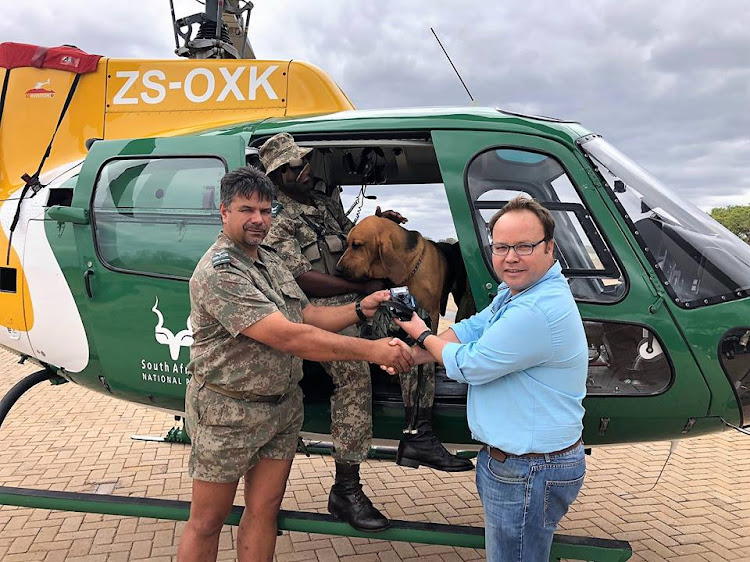 AWE Telemetry Systems handed over 3 GPS harnesses to the SANParks anti-poaching K9 unit, enabling the K9s to be electronically tracked when deployed in the bush, these harnesses are increasing the efficiency and safety of the K9 units.
Image: SANParks via Facebook

Eight rhino poachers were arrested in the Kruger National Park on Tuesday.

SANParks spokesperson Isaac Phaahla said they were arrested during counter-poaching operations inside the park.

“During the operations‚ three heavy-calibre hunting rifles‚ ammunition as well as various other poaching-related equipment were recovered‚” said Phaahla.

“The rhino poaching related arrests took place in three different sections of the park and were a joint effort by the SANParks rangers‚ special rangers‚ K9 and air support units.”

Managing executive Glenn Phillips said the park “continues to experience a number of incursions and many other poaching-related activities on a daily basis".

“We call upon poachers to weigh the risks of getting caught - and we assure them that the gap is closing in on them‚” warned Phillips.

SANParks confirmed last week that a pipe bomb found by rangers in the park on October 12 was homemade.

Rangers on Friday found a pipe bomb near the south-western border of the Kruger National Park.
News
3 years ago

Phaahla said rangers who were patrolling with dogs spotted two “suspicious individuals” hiding in a pipeline underneath a railway line. The rangers noticed that the device was linked to a battery. The bomb squad was summoned and identified the device as a pipe bomb. It was detonated at the scene.