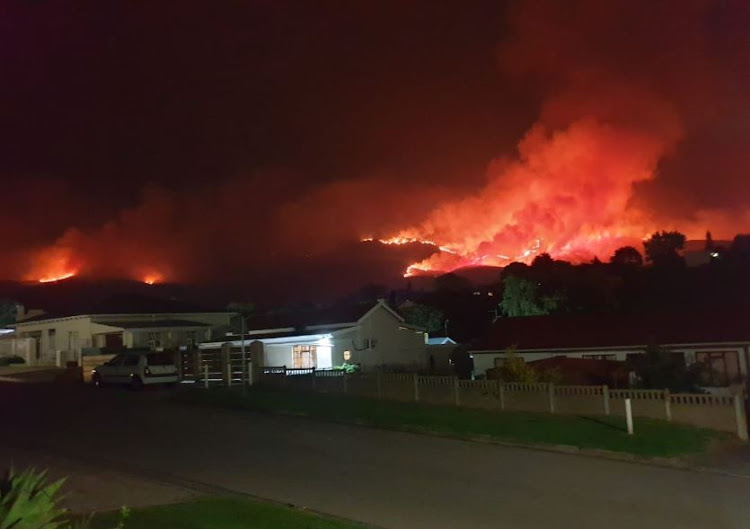 Raging fire along the Garden Route and in George in the Western Cape has taken the lives of seven people and affected electricity supply in the area.
Image: @Eskom_SA via Twitter

Slight overnight rains did little to stop a raging wildfire near George in the Southern Cape‚ which has claimed eight lives.

Police spokesperson Malcolm Pojie said early on Tuesday that two women had perished in the blaze‚ along with six children – all under the age of 12 – at Farleigh near Karatara. A newborn baby was among the dead.

Hundreds of firefighters have been deployed to fight the fire‚ which is being fanned by strong winds.

The death toll in the George blaze has risen to seven‚ emergency services in the Western Cape confirmed on Monday.
News
3 years ago

Three areas have been evacuated and more firefighters have been deployed to battle the blaze in George in the Western Cape on Monday.
News
3 years ago

Western Cape provincial disaster management services head Colin Deiner told HeraldLIVE  “They [victims] were trapped in Farleigh‚ a small settlement in the mountains between George and Knysna. That’s where we found the bodies.”

Deiner said the fires had burnt about 16‚600ha hectares and had forced a precautionary evacuation of three suburbs‚ housing more than 1‚500 people. Residents living on the outskirts of George were evacuated as a precautionary measure.

An additional 120 Working on Fire (WOF) firefighters from the Free State and Eastern Cape have been deployed to assist with fire suppression and mop-up operations. In total‚ about 400 firefighters are fighting the fire‚ assisted by water-bombing helicopters – when conditions permit flying safely.

The George Municipality and GO GEORGE buses evacuated a total of 204 people from the informal settlements in Blanco‚ Golden Valley‚ Riverlea and Step Aside. Karatara residents‚ Nelson Mandela Metropolitan University students from Saasveld and the Sub-Acute Hospital of the Bergville Retirement Village were among those 204 people.

From 6pm Monday‚ residents were moved to the Karatara community hall. More than 200 people were in the hall at the time. Around 12 structures were destroyed in the blaze.

Several people have died in raging fires along the Garden Route which began on October 25 2018. Hundreds of homes have been destroyed in the blaze.