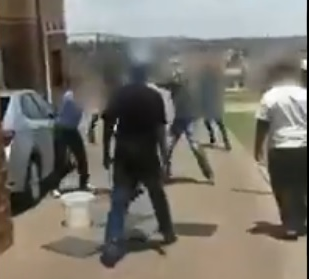 A Soweto pupil chased and threw a brick at a teacher and then kicked hem when he fell. November 2018
Image: Screengrab from YouTube video

The Gauteng education department has decided remove a pupil from his Soweto school after he chased a teacher and threw a brick at him. The incident was captured on video, which went viral.

In the video, filmed at the Albertina Sisulu Centre, a school for children with intellectual disabilities, the teacher is seen running away from the pupil. He then falls and the pupil kicks him.

Mabona said the pupil would not return to the school and that he would attend another school after completing the programme.

He said the teacher had sustained minor injuries, and medical attention had been provided.

“The safety of educators, learners and everyone in our schools must always be guaranteed,” added Mabona.

Meanwhile, education MEC Panyaza Lesufi said there was no room for violence in schools.

A pupil from a mentally challenged school in Soweto will not be suspended due to his condition after he was filmed throwing a brick at a teacher, the ...
News
3 years ago

“We condemn in the strongest possible terms any violent behaviour by both educators and learners,” he said.

Lesufi indicated that the department would not compromise on instilling discipline among schoolchildren, even if they had special education needs.

“The department takes issues of learner discipline in a very serious light and does not hesitate to take appropriate steps to correct the behaviour of learners, including those in learners with special education needs schools. There is no justification for violence and ill-discipline,” said Lesufi.

Mabona had previously stated the pupil could not be suspended nor kicked out of the school because of the nature of his disability.