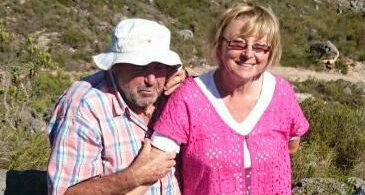 Piet and Elmien Steyn were found murdered on a farm in Bonnievale on December 13, 2018.

A suspect has been arrested in connection with the murder of a couple on a farm in Bonnievale in the Langeberg area of the Western Cape, who were in their 70s.

On Friday, Bonnievale police were alerted to an abandoned vehicle along a dirt road. On further investigation, they went to the Sandfontein farm where they discovered the bodies of the elderly couple.

After originally saying they had been shot, the SAPS said on Sunday: "It is believed the victims were hacked with a sharp object."

An elderly couple has been murdered on a Western Cape farm.
News
2 years ago

“This morning, Bonnievale detectives arrested the suspect in McGregor, another rural town which is not far from the murder scene. The suspect was found in possession of one of the couple’s missing items,” said Brigadier Novela Potelwa.

He is expected to appear in court on Tuesday.

“As the investigation continues, more arrests could be on the cards,” said Potelwa.

Although police did not name the couple, the victim’s brother shared the family’s sadness.

Wikus Steyn took to Facebook on Friday to say his eldest brother, Piet, and his wife Elmien, were humble and had a great love for their children and grandchildren.

“They will be remembered by many for their hard work, but mostly for their hospitality,” he wrote from Malawi, where he is working.

“I forgive those who did this terrible deed.”

On Sunday, Wikus Steyn encouraged people not to be bitter and rejected any attempts to racialise their senseless murders.

“Sadly, in a time of intense heartache, many people used a post meant as a memory to our dear ones as a forum for hate speech. . .

“My heart aches for those who carry so much anger, hate and bitterness.

“Please allow us to mourn the sad loss of our dear ones and not use this as an opportunity to propagate your agendas. I love South Africa and pray for healing.”

The prosecution in the advocate Pete Mihalik murder case is butting heads with the suspected “fixer” over video footage evidence.
News
2 years ago

The case against two men accused of killing seven family members in Vlakfontein in the south of Johannesburg has been postponed until next year.
News
2 years ago

The man at the centre of the kidnapping and gruesome murder of Cape Town-based British botanists Rod and Rachel Saunders spun a tale of torture and ...
News
2 years ago
Next Article