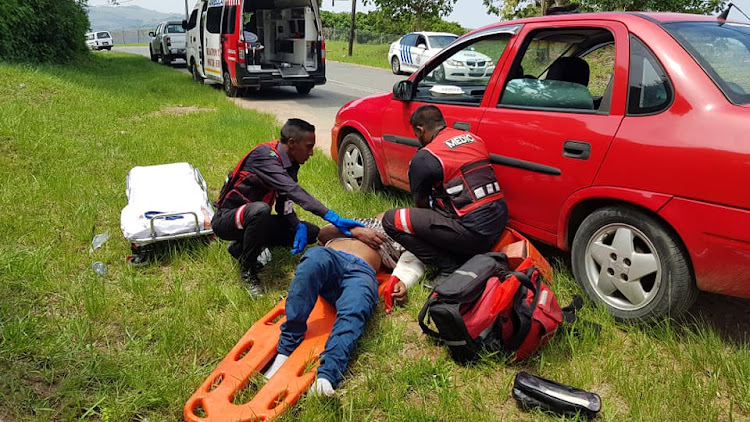 This employee of a trucking company was attacked with a panga at an office party, according to Reaction Unit SA officers who attended to him.
Image: Reaction Unit South Africa via Facebook

A 39-year-old man's arm was "partially severed" during an altercation with a colleague at their year-end party at Hazelmere Dam in KwaZulu-Natal, according to Reaction Unit South Africa.

They are employees of a trucking company, said Rusa.

Rusa was called out just after 2pm on Saturday to attend to the man, who was bleeding profusely from his head and arm.

"Medics treated the man for an open wound to his head and a partial amputation to his left arm.

"The victim’s colleagues informed reaction officers that they were all employed as drivers for trucking companies in Verulam. They had met at the dam to celebrate their annual shutdown.

"Both men were heavily intoxicated when an argument broke out between them. During the argument, both individuals began assaulting each other.

"The suspect then struck the victim on his head and arm with a panga before he fled the scene on foot."

Rusa said although its officers conducted an extensive search for the suspect, he had not as yet been found.

A man is facing a charge of assault with intent to cause grievous bodily harm after allegedly attacking his son-in-law with a machete at the Mugg & ...
News
4 years ago

Could this man qualify as one of SA's unluckiest or dumbest criminals? The alleged robber found himself locked inside the business premises he tried ...
News
3 years ago