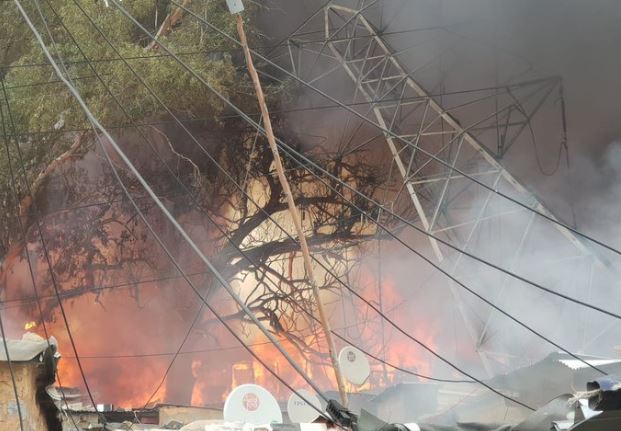 About 100 homes were destroyed after a fire broke out in Alexandra, Johannesburg.
Image: via Twitter/ @CityPowerJhb

It was a chaotic Tuesday in Johannesburg as the city experienced devastating fires, traffic congestion and heavy rains that led to flooding.

In Alexandra township north of Johannesburg, one person was injured and many were left homeless after a fire ripped through the area.

Emergency services said the fire, which has since been put out, destroyed about 100 shacks.

Live visuals at Alexandra township... Another #AlexFire people have lost their homes and valuables out here. It's devastating because even the Fire Fighters can't get to the flames because of how these shacks are setup... pic.twitter.com/ubHX4UUOlT

The Jukskei River in Alexandra from the heavy rain earlier.😳 pic.twitter.com/p0Ewa7FUbc

CoJ EMS currently at the scene of the #AlexFire ^TK pic.twitter.com/Wsy57r1bGR

Our @CoJPublicSafety #DisasterManagement is on scene in #Alexandra conducting a needs assessment, after @CityofJoburgEMS extinguished the fire.

We have a dangerous situation in Stjwetla Alexandra where one of our pylons and the overhead lines from the pylon fell on the shacks resulting in them catching fire. As of now we dont know the cause of this or if there are any casualties.We have dispatched a team to probe. pic.twitter.com/MEWVpYMWdh

The city experienced heavy traffic congestion due to flooding, which left many commuters stuck in traffic for several hours on Tuesday evening.

Traffic is currently very heavy in the InnerCity &Braamfontein area due to heavy rain and roads flooding. JMPD officers are controlling and diverting traffic for a smooth flow.

Motorists are requested to drive with caution and be patient during this time. pic.twitter.com/UpscXdF99K

Never have I ever been this scared for my life 😭😭 braamfontein pic.twitter.com/lTO37vhcoA

This is Braamfontein in Johannesburg at this moment. Can anyone explain why people are not able to go home after work even at this hour ! Am really feeling the pain of those stuck in this traffic gridlock. JMPD where are you at this moment ??? pic.twitter.com/P1jZiwnV3v

Current situation rn on the road entering into Braamfontein, next to Wits.

You're the taxi driver, what do you do? 😯 pic.twitter.com/dNtEPVhMul

One person was seriously injured in a fire in Stjwetla, Alexandra, on Tuesday afternoon.
News
3 years ago