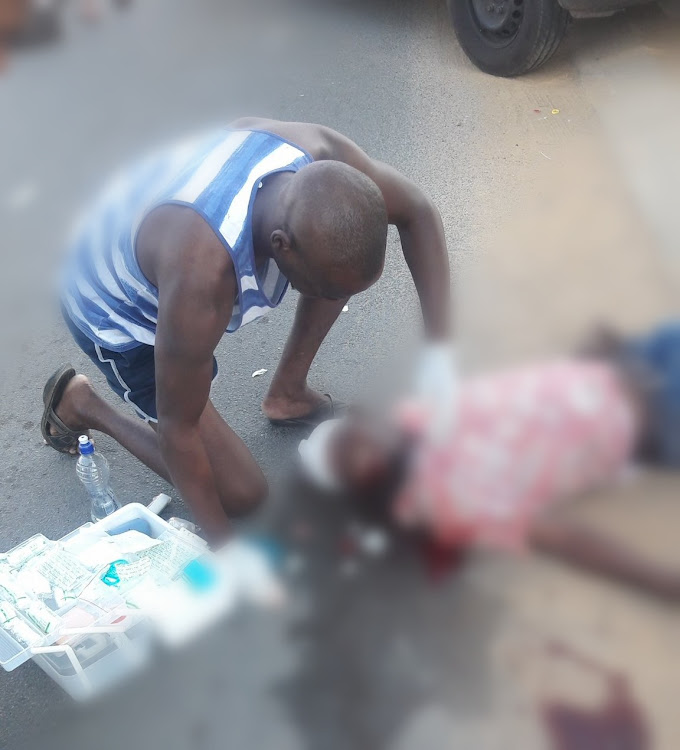 Unemployed nurse Bongani Khunjwa helps a pedestrian who was hit by a car, armed with just a pharmacy first-aid kit.
Image: Rendani Manyage

Driving home after a hectic gym session Bongani Khunjwa, a professional nurse, saw a man bleeding on the side of the road after having been hit by a car.

"I arrived moments after the accident; the poor man was surrounded by people. Some kept on taking pictures and videos. As soon as I saw what was happening, I ran over to assist, my humanity would not allow me to drive past," Khunjwa told TimesLIVE.

The incident took place in Cosmo City, Johannesburg, on Sunday.

The 30-year-old Khunjwa said the patient had a head injury.

"He was heavily bleeding from his upper body, the head specifically. I bandaged him, and assisted as necessary to prevent further blood loss."

Khunjwa was equipped only with his training and basic supplies from a pharmacy.

"I used my first aid kit from my car. I travel with it everywhere I go," he said.

Khunjwa, who is unemployed at the moment, did not hesitate to assist the pedestrian.

"I don’t consider my profession to be a job, because when you have a job, you have some time off to yourself. I live it daily, it's within me, 24 hours a day, employed or not," he said.

Following the incident Khunjwa has been praised for his efforts to help the man.

"Not all heroes wear capes. This guy (Khunjwa) had to quickly jump in to help a pedestrian hit by a car with a first aid kit from Dischem, while they waited for an ambulance," said Rendani Manyage.

The Mpumalanga-born nurse said he was raised by a mother who taught him the importance of selflessness.

"In everything that we do, she always emphasised the need to be selfless, she is a firm believer of the African proverb 'umuntu ngumuntu ngabantu'," he said. The proverb can be loosely translated as "every person is who they are because they are part of the collective of humanity".

"Helping those in need is really fulfilling. Growing up,  I've always wanted to help, to make a difference. It makes one look forward to each and every day," said Khunjwa.

The pedestrian was in a stable condition and was later taken to a Johannesburg hospital by paramedics.

Dr Nhlakanipho Mkhize was just five years old when his mother took her last breath as he slept next to her on the bed they shared.
News
2 years ago

A doctor determined to treat his patients at a rural clinic hiked for kilometres with 25kg of medicine on his back and then swam across a river to ...
News
2 years ago