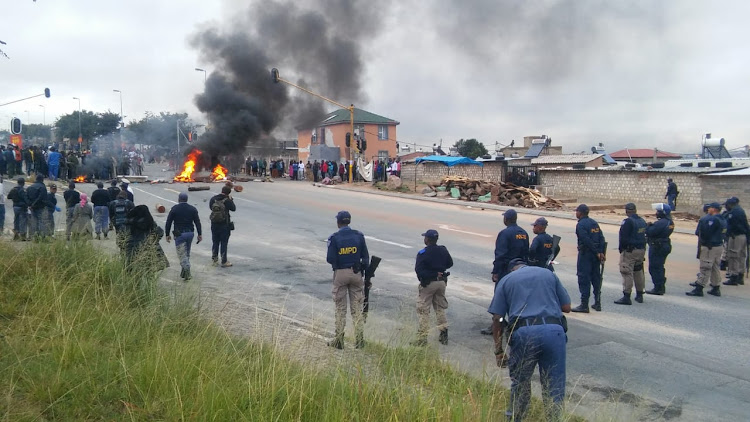 Passengers arriving at the Marlboro Gautrain station in Gauteng on Wednesday had to be sneaked out as Alexandra residents protested against a perceived lack of service delivery in the township.

Since 4am, police have been deployed in various parts of the township to defuse the "total shutdown" protests organised by residents who are complaining about lack of services in the area.

Police successfully defused protests in other parts of Alexandra, but the one next to the Marlboro Gautrain station gained momentum.

Residents barricaded the road leading to the station with rocks and burning tyres, demanding to speak to the director of Johannesburg Region E's office.

Thandiwe Mthombeni, one of the organisers of the protests, said: “It is all about service delivery. The municipality does not attend to our problems. We’ve been logging calls to the municipality regarding illegal structures in our neighbourhood and nothing has happened. We’ve called the police and officials to help stop people from building anywhere they like, but nobody heard our cry,” said Mthombeni

“We’ve been complaining to Pikitup about the collection of waste in our area and nothing has happened. They have turned our place into a scrap yard. There are people who come from nowhere and build under pylons. The last time a pylon fell and burnt a number of shacks. They came and rebuilt the shacks and the people are back.”

Mthombeni said Alexandra had become unsafe. Drug use, she said, had become a huge problem and house break-ins were on the rise.

She said residents marched six weeks ago to the Region E offices in Sandton, where they submitted a memorandum of demands.

Police are currently negotiating with representatives of the residents in an effort to clear the road.

The residents have promised the police that they will not be violent, but demand that the director at the Region E office comes to address them.

While the negotiations continued, the SAPS, supported by the Johannesburg Metropolitan Police Department (JMPD), formed a line on the road, rubber bullets at the ready. Further up the road, community members stood singing struggle songs.

Residents of Alexandra in Johannesburg blocked roads in various parts of the area on April 2 2019 over what they say is poor service delivery and a lack of development.