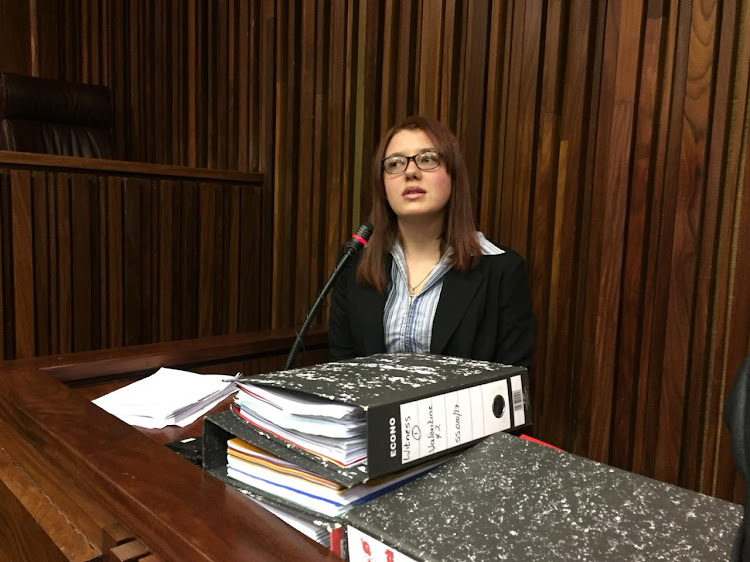 Marcel Steyn revealed gruesome details during her testimony in the Johannesburg high court on Monday May 13.
Image: TimesLIVE/Iavan Pijoos

Marcel Steyn, the youngest of the "Krugersdorp killers" on trial for an alleged murder spree spanning four years, broke down in the South Gauteng High Court while describing her mother beating a person she knew on the head with a hammer.

Steyn, dressed in a black suit and shirt, took deep breaths as she walked towards the witness box on Monday and gave evidence about the death of travel agent Mikeila Valentine.

Steyn - along with Cecilia Steyn, 37, and Zak Valentine, 33 - have pleaded not guilty to 32 counts, including murder, robbery with aggravating circumstances, fraud and intimidation.

Her brother Le Roux Steyn entered into a plea bargain with the state in 2018.

Her mother, Marinda Steyn, 51, has already been sentenced to 11 life terms for the killing spree.

Convicted murderer Marinda Steyn looked one of her victims in the eyes, told her to pray and then stabbed her to death.
News
3 years ago

They were all part of Electus Per Deus - a group that viewed themselves as "chosen by God" - which allegedly killed 11 people between 2012 and 2016.

Marcel told the court on Monday that they were instructed by Cecilia to murder Zak's wife Mikeila because she was a "loose string".

Marcel said Cecilia had arranged with Zak to give Mikeila medication the night before. She said when they arrived at the house, they found Mikeila sleeping in bed.

She said she watched as her mother went in and started hitting Mikeila in the head with a hammer.

"My mother put the hammer down and started stabbing her. I stood there and I just froze. I just kept on thinking and felt that this was Mikeila," Steyn said while wiping her tears.

"I stood there and I was looking at my mother stabbing her."

She said she later took a knife and stabbed Mikeila in her side.

While Marcel testified, Zak sat unfazed in the dock next to Cecilia, who had her head hung low.

Marcel said she regarded Mikeila as an older sister, adding that she had taught her how to bake. "I decided I will speak the truth and not lie. Before, I used to say I wasn't involved in any of these matters. But I want to disclose my involvement in these matters completely,” she told the court.

"I couldn't handle the lies anymore. Cecilia was not the person she portrayed herself to be. I don't want to be living a lie."

Marcel told the court that she was scared because she did not know how Cecilia would react. She said when she was 13, Cecilia told her that she had "demons" that caused her to not show emotion or empathy towards others. She wanted to see a psychologist but someone told her mother that Cecilia could help her.

"I didn't feel any different, because I felt like a normal human being. At the same time, she had the same demons and I felt that we had something in common, because she favoured my brother."

The first people the group murdered were Natacha Burger, 33, and Joy Boonzaier, 63. Marcel said they were murdered by Zak and his wife Mikeila. "Mikeila couldn't get herself to kill Joy. After Zak killed Natacha, he went into the room and killed Joy," she said.

Marcel told the court that Cecilia also wanted pastor Reginald Bendixen dead. She said she accompanied her mother and Zak to kill Bendixen. They wore fake police uniforms and wigs.

"When they went into the house and I followed them, I heard an exclamation. I think that is when Zak hit him with an axe," she said.

Bendixen was on the ground while her mother was stabbing him. Marcel said she froze when she saw what was happening.

Later, on the way to Cecilia's flat after the murder, she said they stopped and threw the knife and axe into a drain.

She said when they murdered Peter Meyer and his wife Joan, Peter called out Psalm 23 while he was being stabbed by Zak. Following the murder, Marcel said she felt that everything had "spiralled" out of control and the victims did not deserve to be murdered.

'Krugersdorp killers' would drug, film and blackmail their victims

“Wherever I go they fall like flies,” is one of many threatening messages Ria Grunewald got when she cut ties with Cecilia Steyn.
News
3 years ago