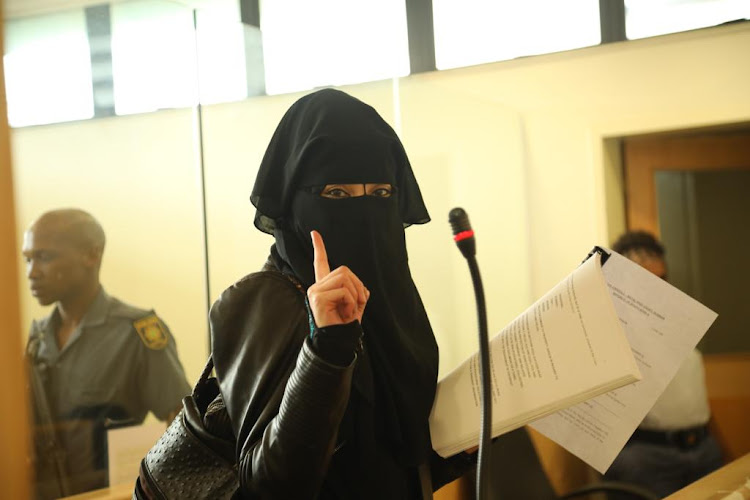 Fatima Patel, the common law wife of Aslam Del Vecchio raises a single index finger. The gesture which is said to signify the "oneness of God" in Islam however has been adopted by jihadists within the Islamic State. She appeared in the Verulam magistrate's court on terror-related charges.
Image: Jackie Clausen

Alleged Islamic State loyalists couple Aslam Del Vecchio, 39, and his wife Fatima Patel, 28, were asked to respect the court as they shared moments of affection and banter during their appearance on Tuesday.

The pair, who appeared with their co-accused Ahmad Jackson Mussa, 35, were warned by their legal aid attorney, Mondli Mthethwa, to stop their display of affection as it might be perceived as disrespectful to the court and sitting magistrate Irfan Khalil.

During their appearance at the Verulam magistrate's court, state prosecutor Torie Pretorius handed over a provisional indictment to the magistrate.

He said that the national director of public prosecution needed to go over it and authorise prosecution because of the nature of the charges brought against the trio.

The provisional indictment details how the trio were allegedly involved in the kidnapping and murder of Cape Town-based British botanists Rodney and Rachel Saunders and how they used Rachel Saunders' bank card to make various purchases.

Books relating to Islamic State were also found in their possession.

While Mussa appeared fidgety and nervous in the dock, Del Vecchio and Patel seemed relaxed and affectionate, with Del Vecchio smiling occasionally.

The trio via their attorney listed a number of grievances about their prison conditions. Mthethwa told the magistrate that Patel's Arabic Koran (a religious Muslim text) had been confiscated by prison officials. 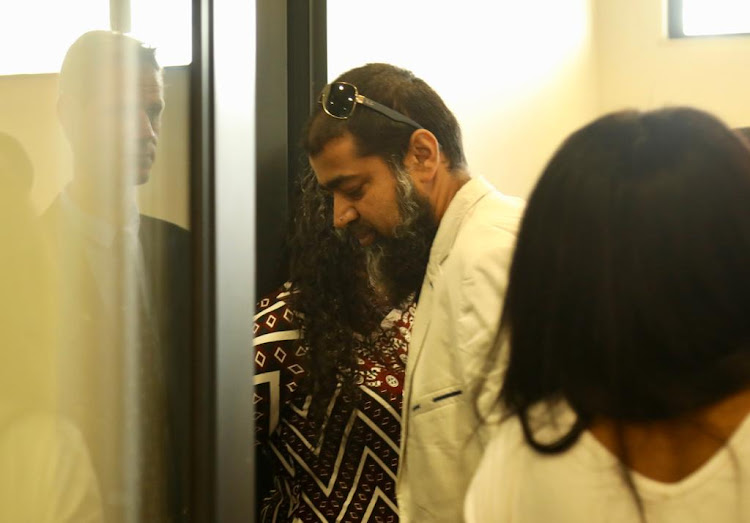 Farhad Hoomer, who is on R200,000 bail on terror-related charges, sat in on the case against Aslam Del Vecchio his wife Fatima Patel at the Verulam magistrate's court.
Image: Jackie Clausen

He said also that his clients complained that during their trip from the Ebongweni C-Max prison in Kokstad, they were shackled, making it difficult for them to keep their balance in the back of the prison van.

Among the heavily armed police officials at the court was Farhad Hoomer, the alleged mastermind behind a Verulam mosque attack in May 2018, as well as a series of firebomb attacks at retail outlets in the months that followed.

Hoomer, together with 11 other men, appeared on Monday in connection with a string of terrorism-related charges as well as murder, attempted murder, arson, and extortion.

They were arrested in a co-ordinated Hawks raid on October 5.

A US air strike killed 13 Islamic State fighters in Somalia's semi-autonomous Puntland region on Wednesday, the US military said, days after another ...
News
2 years ago

Three alleged Islamic State loyalists failed to appear in the Verulam Magistrate's Court on Tuesday due to the "security risks" of transporting them ...
News
2 years ago
Next Article