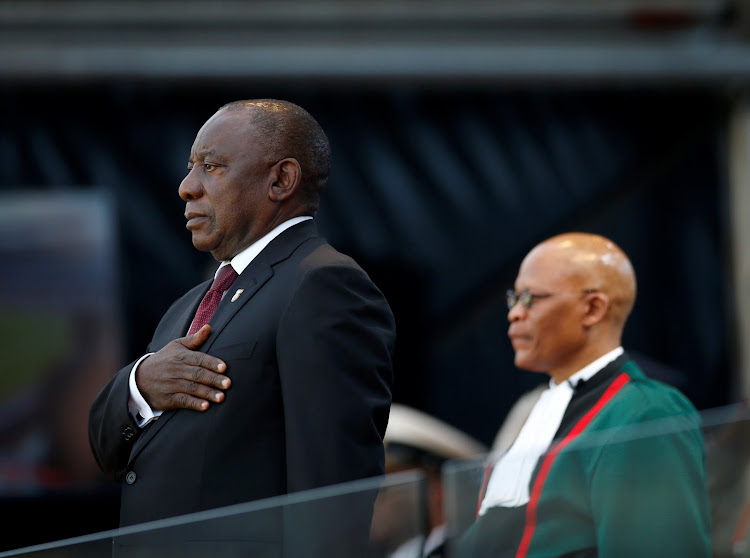 Cyril Ramaphosa takes the oath of office at his inauguration as South African president on May 25 2019.
Image: REUTERS/Siphiwe Sibeko

South Africa’s gross national happiness index on Saturday, the day Cyril Ramaphosa was inaugurated as president, remained high, unlike on other Saturdays.

This is according to wellbeing economists Prof Talita Greyling of the University of Johannesburg and Dr Stephanié Rossouw of Auckland University of Technology in New Zealand.

The happiness index was launched in South Africa on April 30, a week before the May 8 national elections.

The index was launched in New Zealand on May 14 and in Australia two days later to monitor sentiment around the elections in those countries.

The index is based on sentiment analysis of the daily tweets of South Africans, from which a happiness score is derived.

The scores are between 1 and 10, with 5 being neutral, thus neither happy nor unhappy.

South African tweeps wake up happy ... but then reality kicks in

We are at our happiest at 5am, before the day's negativity gets us down.
News
2 years ago

Greyling and Rossouw, who followed political events in South Africa a week before the elections, found that the happiness index was very closely related to political events.

The team followed the day’s happiness score hourly on Saturday, when Ramaphosa was inaugurated, to evaluate the mood of South Africans.

The team said Saturday morning happiness followed the same pattern as all preceding Saturdays, with the high being reached a little later than during the week, at approximately 9am.

They said the rest of the day’s happiness scores fluctuated between 6.5 and 6.8.

On a normal Saturday the happiness score started to decline from 2pm, they said. However, this was not the case on Inauguration Saturday.

"This Saturday was different from the others, in that instead of the mood declining from 2pm onwards, it increased to highs of 7 and more, and the happiness score remained higher than on any other Saturdays, until 8.30pm, reflecting the positive mood of the country."

Cyril Ramaphosa was inaugurated as president of South Africa's sixth democratically-elected government on May 25 2019. The presidential Inauguration took place in the City of Tshwane at Loftus Versfeld Stadium.

The team said analysing the tweets showed that the country liked what it saw and heard during the inauguration, a president who accepted the challenge put to him and who promised that change would come.

"A change desperately needed in all facets of society; economically, politically and socially. The country has faith in President Ramaphosa and will follow his policy decisions closely, and, come next election, will hold him to his promises."

"As the country anxiously awaits the announcement of the cabinet, the high level of political energy was reflected in the higher scores of happiness throughout Sunday".

The team said this would be the first opportunity for Ramaphosa to show his determination and steel, and deliver on his promises.

"Will he decrease the size of the outrageously large cabinet to limit unnecessary expenditure? We will have to wait and see," the economists said.

Ramaphosa delays the announcement of his new cabinet

President Cyril Ramaphosa delayed announcing his cabinet on Sunday after consulting his deputy, David Mabuza, and other senior ANC leaders.
Politics
2 years ago

Is SA led by folk who live in the past, present or future?