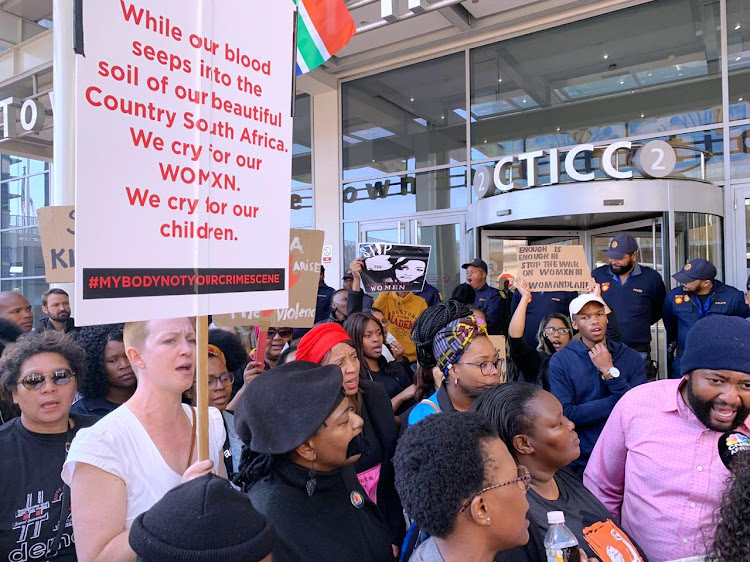 Protesters outside the World Economic Forum on Africa on September 4 2019 at the Cape Town International Convention Centre.
Image: Anthony Molyneaux

President Cyril Ramaphosa's special adviser on gender-based violence was shouted down on Wednesday when she attempted to address protesters who gathered outside the opening session of the World Economic Forum (WEF) on Africa in Cape Town.

Olive Shisana emerged from the Cape Town International Convention Centre to address a crowd of students hoping to capitalise on the media attention being focused on the WEF Africa meeting.

Protesters outside the World Economic Forum in Cape Town demand for the country to be shut down and a state of emergency to be declared in the wake of a week of violence against women. @TimesLIVE pic.twitter.com/NmbKHUKCtz

When she told them, "the president has been very strong on fighting gender-based violence" they erupted in loud jeers that culminated in the chant: "We want state of emergency."

Shisana joined in with the chant, which developed into a call to "shut down the country".

When Shisana attempted to resume her remarks, the demonstrators refused to listen to her, chanting: "We want Cyril."

Shisana introduced herself as the chair of the presidency's interim steering committee on gender-based violence and femicide, which held its first meeting on Tuesday.

But her remarks about steering committees and declarations angered protesters, who said they were demanding action rather than words.

"Enough is enough" is the cry as protesters congregate at the gates of parliament in defiance of gender based violence. #AmINextPROTEST @TimesLIVE pic.twitter.com/Bgj1kqNDnp

At the other side of the CBD, a growing crowd of students picketing at the main gates of parliament said they were tired of talk and wanted action, with some demanding the return of the death penalty.

"The government must get off their arses and do something," said one protester.

"What is our leadership going to do? What are they going to do to make us safe?" asked a University of Cape Town student who addressed the crowd.

Police minister Bheki Cele attempted to address the protesters but he was shouted down. "What the f*** are you doing?" the demonstrators chanted.

National Assembly speaker Thandi Modise told the protesters: "We want our children to be safe, our space to belong to us. We want to walk wherever we want as women and children."

She promised action to address gender-based violence. "We are going to work, we are going to make changes. The minimum sentence must be a life sentence," she said.

"We will put pressure on the minister, on everyone in government. Police need to be retrained."

The protests were part of a national uprising against gender-based violence sparked by the murder of 19-year-old UCT student Uyinene Mrwetyana.

South Africans are a smorgasbord of emotions after details of murder, kidnapping and looting dominated headlines on Monday.
News
2 years ago

Violence erupted at the University of the Western Cape early on Wednesday amid a rush to identify alleged rapists following the murder of student ...
News
2 years ago