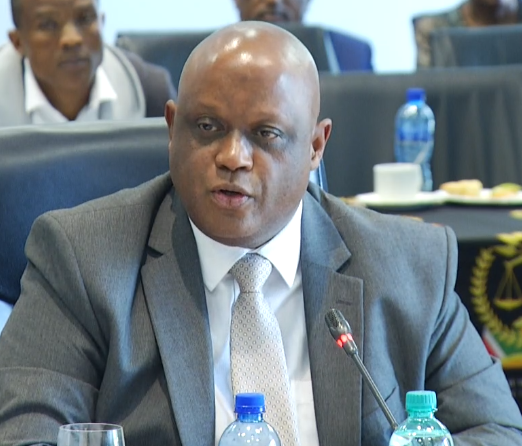 Judge Ronald Hendricks is being interviewed for the position of deputy judge president of the North West.
Image: Screengrab/ JSC

The judicial service commission (JSC) on Tuesday said it would recommend judge Roland Hendricks for the position of North West deputy judge president.

Hendricks is being interviewed for the position for the third time, having failed twice in the past.

He is the only candidate interviewed for the post this time.

During his interview Hendricks had to answer questions about his former political affiliation to the ANC, as well as his handling of traditional leadership cases which reportedly had raised concern among critics in the academic fraternity.

He was asked why he thought he would be successful this time around.

"Not only is there a passage of two years that elapsed [since my last interview], I have had the opportunity to act as deputy and judge president, where I have demonstrated my capabilities of being in a leadership role," Hendricks replied.

Having served as a judge since 2003, Hendricks has presided over one of SA's most prominent domestic violence cases - the murder of police constable Francis Rasuge.

She was last seen alive with her lover, William Nkuna, before disappearing. Her remains were found eight years after she was reported missing. Nkuna is serving a life sentence.

Hendricks was questioned on whether he felt the justice system was decisively dealing with cases of gender-based violence. To this, he answered that the law was taking its course.

He also presided over the "sunflower case", in which a teenager from Coligny, Matlhomola Mosweu, was killed reportedly for stealing sunflowers.

He sentenced Mosweu's murderers, Phillip Schutte and Pieter Doorewaard, to 23 and 18 years in jail respectively.

Judge Roland Hendricks who is in the running for the position of the deputy judge president of the North West on Tuesday moved to assure the judicial ...
News
2 years ago

Convicted Coligny murderers Phillip Schutte and Pieter Doorewaard were sentenced to 23 and 18 years respectively by the North West high court on ...
News
3 years ago

Closure for family as slain Rasuge is laid to rest

AFTER eight years of desperately trying to locate her remains, the family of slain police constable, Francis Rasuge, finally laid her to rest ...
News
10 years ago