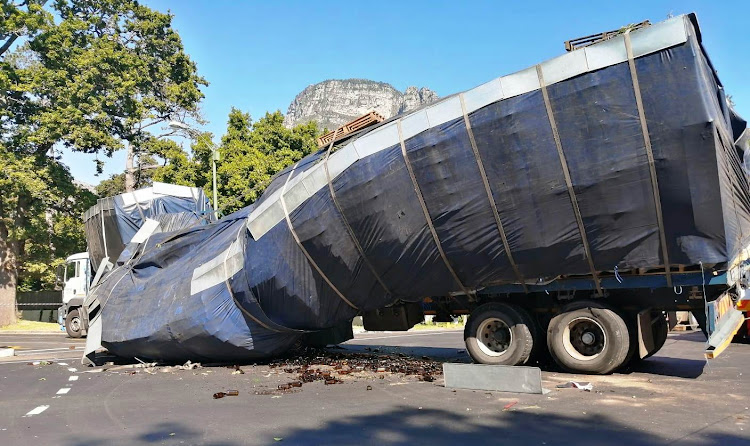 The truck carrying empty bottles which jack-knifed when the driver attempted a U-turn on the M3 in Cape Town's southern suburbs on November 28 2019.
Image: City of Cape Town

This is the truck that made it a black Friday in more ways than one for commuters in Cape Town's southern suburbs.

The truck jackknifed late on Thursday when the driver attempted a U-turn at the intersection with Rhodes Drive, said city spokesperson Maxine Bezuidenhout.

The M3, one of two key commuter routes from the southern peninsula to the city centre and beyond, was closed in both directions during the Friday morning commute.

"Given that the incident happened at night, it was not possible to conduct a proper assessment of the situation," said Bezuidenhout. "Efforts are under way to secure the load - empty glass bottles - so the truck can be moved out of the roadway.

"In the interim, all traffic is being diverted. The M3 towards Cape Town is now closed at Constantia Main Road. The M3 direction Muizenberg is closed at Newlands Avenue."

Been sitting in traffic on the M3 for 1h30min and I’m only 8km away from my house my destination is Further 12km away. Will I ever get there?

The 'boda boda' scooters and 'matatu' minibuses in Uganda and Kenya add a charming chaos to the streets, writes Gugulethu Khumalo
Lifestyle
2 years ago

Saturday morning began where Friday afternoon left off near the Cape Town townships of Dunoon and Joe Slovo, with residents stoning cars and a bus ...
News
2 years ago

One killed, 30 injured as crane falls off truck onto taxis and car in Durban

A massive crane fell off a truck in Merebank, Durban, shortly before midnight on Friday, smashing into two taxis and a car.
News
2 years ago