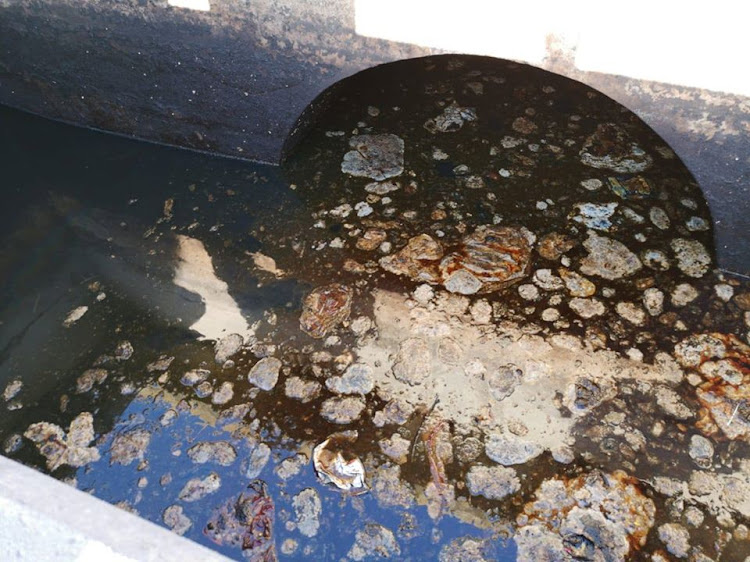 Oil from a stormwater system enters the lagoon at Milnerton Riding Club, according to a residents' association post on December 5 2019.
Image: Milnerton Central Residents Association via Facebook

Lobby group Organisation Undoing Tax Abuse (Outa) says it will assist residents of Milnerton in Cape Town, who have been waging a campaign to force the city to improve its management of sewage pollution.

Residents are concerned about raw sewage flowing into Milnerton lagoon and say there is inadequate regulation over mushrooming apartment blocks in the area.

“Sewage is a hazardous waste and must comply to standards for it to be discharged safely,” said Outa operations boss Julius Kleynhans.

“Non-complying waste poses severe health and safety risks to humans and the environment, and must be stopped.

“The non-compliant disposal of sewage in water courses and protected areas is unacceptable and criminal.”

The organisation said there is concern that the Potsdam waste water treatment works is polluting the Diep River, which has led to the uproar in Milnerton.

Kleynhans said: “While we believe the city’s drinking water is intact, we want to caution holidaymakers, recreational users and those who use boreholes along contaminated sources to take serious precautions. Symptoms of diarrhoea and vomiting may be related to sewage pollution.”

A photograph of the lagoon recently posted on Facebook highlighted the residents' concerns.

Milnerton Lagoon, one of the most polluted water bodies in our city, empties into the sea next to the Lagoon Beach...

The City of Cape Town responded to the picture by saying it “reflects an algal growth in the Diep River that is entering the sea”.

The algal growth is a result of urban pollution of the river system from multiple sources, it said.

According to the city's statement, these sources include:

• Sewage breakages and pump station failures due to load-shedding, and misuse of the stormwater system;

• Misuse of the sewer system, creating blockages and overflows. This problem is compounded by illegal land occupations, which make access difficult for maintenance staff;

• Agricultural run-off in the Diep River catchment; and

• Treated effluent from the Potsdam waste water system, which contains ammonia and nitrogen.

This burden of urban pollutants has accumulated in the system, said the city council.

“This, together with the warmer summer temperatures, most likely resulted in the algal growth in the river and estuary system. Pollution warning signs are in place to advise the public not to swim in the river or at the lagoon mouth.

“Fortunately, dissipation and dispersion rates are high once the algae reaches the sea and the coastal impact is limited to the lagoon beach/estuary mouth area.”

A pollution mitigation action plan for the Diep River catchment is being prepared, the city said. However, “due to the number and complexity of the sources of pollution, a quick fix of the problem is not possible”.

Milnerton Central Residents' Association responded on Facebook to the city, saying its officials should have acted faster and more effectively to handle the problems.

“Despite knowing that there are significant problems and challenges, the city has not allocated budget to address the issues they identified in their own report,” it said.

The organisation called on the city to urgently implement projects to manage the situation and to stop developments without the necessary infrastructure to support them.

“If the city continues to be unwilling to do what is right, we will hold them responsible in both their personal and official capacities for the mess they have created,” the association said.

Outa’s chief legal officer, Stefanie Fick, said: “We will consider all relevant avenues to ensure accountability on this matter.”

The SA Human Rights Commission has called for a criminal probe into complaints against three municipalities in Mpumalanga that released untreated ...
News
2 years ago

For three months, raw sewage overflowed into a street in Soweto-on-Sea in Port Elizabeth, with municipal workers reluctant to fix the drains because ...
News
2 years ago