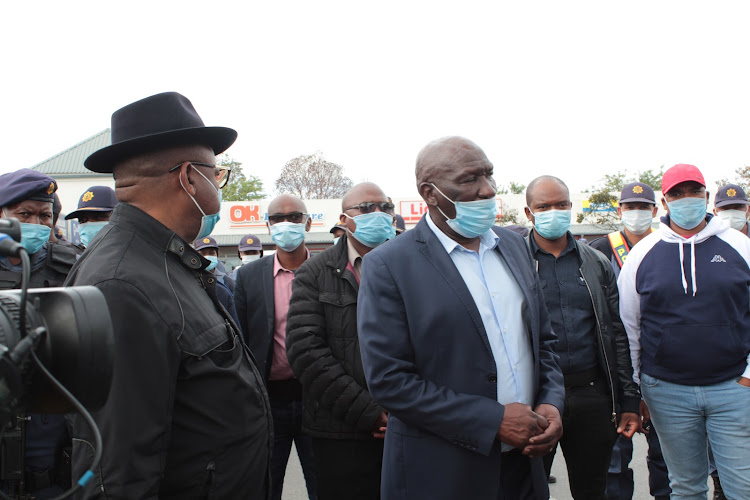 One of police minister Bheki Cele's biggest headaches since the Covid-19 lockdown was announced is the growing spate of alcohol theft.

Cele, who has frequented the Western Cape since the lockdown started, visited shopping centres in Mbekweni, in Paarl, and Kraaifontein on Saturday. He hinted that a syndicate could be behind the burglaries.

Cele, who was accompanied by senior police officials, said 16 liquor stores had been burgled — and that the Western Cape was leading with the break-ins. Quite sobering was Cele’s revelation that two police officers and a liquor store manager had been bust for supplying an underground market. Cele vowed to deal harshly with those found selling liquor during this period.

“I don’t know where this tendency comes from,” said Cele.

“It started in Langa. When I asked some of the suspects who have been arrested why they did it, they said they are hungry. I asked them how can they steal alcohol when they are hungry?” 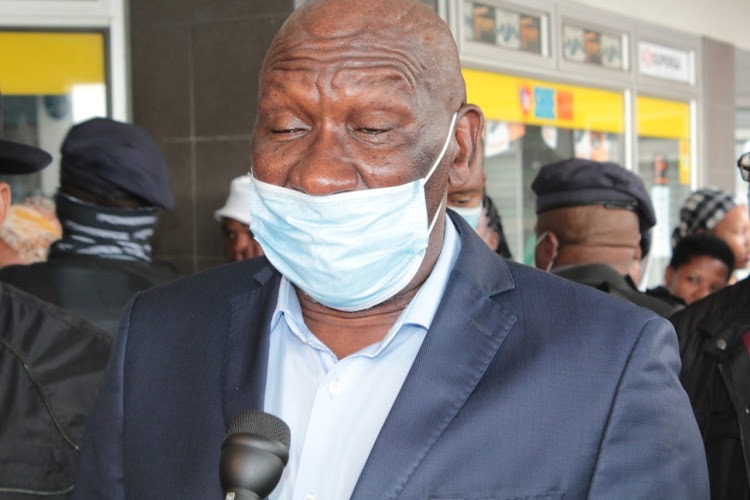 Police minister Bheki Cele said it was alarming that police officers have been arrested for links to illegal alcohol trade during the lock down in the Western Cape.
Image: Philani Nombembe

Cele said some of the burglaries seemed planned while others were spontaneous.

“In some cases, people just see alcohol and decide they want it. Whilst in other cases there is some of planning that goes on. For instance, in Mbekweni they had a saw which they used to cut the chains. They also used a shovel to break the door. You cannot say that happened spontaneously. It tells you that people sat down and planned it,” said Cele.

He said some of the cases were very intricate.

“There is more complex corruption as well like at the store where we arrested police officers. We agreed with the national police commissioner that he should fire them immediately. They must leave the force completely,” Cele said.

More than 70 schools broken into in Mpumalanga during lockdown

A total of 72 schools have been broken into in Mpumalanga since the start of the national lockdown, the province's education department revcealed on ...
News
2 years ago

“They were arrested with the store manager. They were engaged in underhanded dealings, selling the alcohol. It means these things are happening. We have other initiatives as police that we cannot reveal at the moment before engaging the business community and liquor traders.

“Under this Disaster Management Act, all bottle stores are illegal. This means that we have to arrest anyone who sells alcohol and seize everything including refrigerators. That is what we are going to do.”

Cele interacted with shoppers and urged them to maintain the required distance in queues. In both Mbekweni and Kraaifontein, residents came in numbers to shop.

In a subsequent statement, the police ministry said 21 suspects, four of whom were allegedly behind the first looting incident at a Shoprite Liquor Store in Langa, Cape Town, over the first weekend of the lockdown, had been arrested.

Cele also said he was concerned at the alleged involvement of police members in some of the liquor-related crimes during the lockdown.

Two warrant officers from the Delft Family Violence, Child Protection and Sexual Offences Unit in the Western Cape, have been arrested together with a liquor store manager and a cashier in Strand, after police on Thursday responded to a tip-off and pounced on the suspects inside the store, buying liquor that was allegedly going to be resold illegally elsewhere.

And in Mpumalanga province, two officers from the Pienaar district were arrested on Friday night, on a charge of defeating the ends of justice after the state vehicle they were driving was stopped and found to have been illegally escorting three bakkies, each loaded to capacity with liquor. The three vehicles allegedly belong to a tavern owner who was also arrested with two other drivers for contravening the lockdown regulations in relation to the restriction on the movement of liquor.

Cele's office said he has called for an urgent meeting where, together with SAPS management, they will “engage liquor retailers to address this problem and work out a collaborative strategy towards mitigating this emerging risk.”

Cele called on all citizens to abide by the lockdown regulations.

“The general crime picture since the Covid-19 lockdown continues to reflect a decrease. Our law-abiding citizens must continue to work with law enforcement against criminals as we together ensure the survival of the human race against the Covid-19,” said Cele.

There are now 24 confirmed deaths linked to Covid-19 in SA, half of them in KwaZulu-Natal.
News
2 years ago