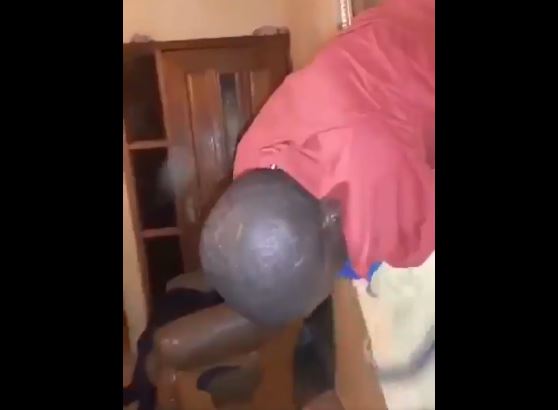 A man was truly locked down when tried to break into a house.
Image: Screengrab

Lockdown took on a whole new meaning for a man who found himself dangling upside down and trapped in a window while allegedly trying to break into a house in Klerksdorp, North West.

Provincial police spokesperson Col Adele Myburgh confirmed the incident, which was captured on video, happened in the early hours of Saturday.

In the video, the suspect can be seen with his head down and wearing a blue sweater. He struggles to release himself from the window, leaving blood stains on the wall from his hand while crying out in pain.

BURGLAR BROKE INTO HOUSE & GOT STUCK IN THE WINDOW HE BROKE IN THROUGH : ALABAMA. KLERKSDORP. NW. NOW THATS WHAT U CALL LOCKDOWN😄 pic.twitter.com/luAvT2pe2Z

He calls out to a woman inside the house, who is filming him, asking her to let him explain.

“Let me explain,” he pleads while attempting to take off his jersey.

Myburgh said the incident took place around 4.55am.

“The 39-year-old is in court. He was not seriously injured during this incident."

Myburgh said a case of housebreaking was under investigation.

WATCH | 'Lockdown has been brutal': vendor arrested for selling atchar mocked by community

Thandi Thabethe said her desperation to put food on the table during the national lockdown is why she took the risk.
News
2 years ago

While family and friends are forced to be apart and special celebrations are put on hold a mother-to-be was overjoyed to be given a surprise ...
News
2 years ago