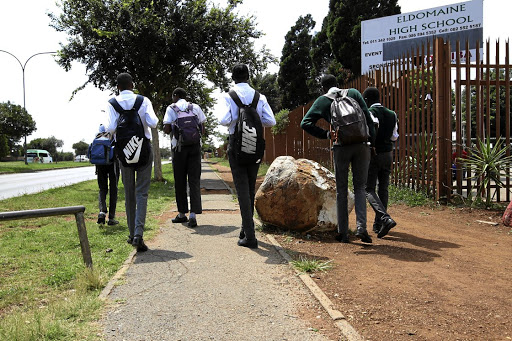 The department of basic education is proposing that the school timetable be rearranged to allow different grades to attend classes on alternate days of the week or in alternate weeks.

Schools could also introduce a platoon system in which pupils in certain grades attend classes in the morning and others in the afternoon.

These are the three options the department's director-general, Mathanzima Mweli, put on the table during a virtual meeting with governing body associations and a principals' association on Sunday.

During his presentation on the re-engineering of schooling, Mweli is said to have told the meeting that schools should operate at 50% of their normal capacity.

The document he discussed is expected to tabled at a special meeting of the Council of Education Ministers (CEM) on Monday, which would include basic education minister Angie Motshekga and the nine provincial education MECs. The CEM will consider progress made towards the reopening of schools.

Motshekga is now expected to address the nation on Tuesday afternoon about preparations for the reopening of schools, after her anticipated Monday address was pushed out by a day.

One member who attended Mweli's presentation said some of the basic principles around organising the timetable that were discussed included departmental regulations, the type of school, the time left in the school calendar and the differentiation in the level of difficulty of different subjects.

Dr Faith Kumalo, the department's chief director for school health, did a presentation on comorbidities affecting teachers and how they planned to address this issue. The department had received guidance from the national health department about the risk factors for severe Covid-19.

The member said Kumalo had mentioned that teachers who were 60 years and over and were very healthy would not be considered high risk and could report for duty.

Among the risk factors mentioned in a document the department has been sending out to stakeholders are moderate to severe hypertension, congestive cardiac failure, moderate to severe asthma, chronic kidney disease, severe obesity and third trimester pregnancy.

Matakanye Matakanye, general secretary of the NASGB, declined to comment on the presentations. He said he would comment once they were tabled by Motshekga.

More than 5,000 schools in Covid-19 hot spots across SA, including 929 private schools, will stay shut next month if the cabinet approves a new ...
News
2 years ago

Provinces 'need more time' on the reopening of schools, verdict due after Monday

Basic education minister Angie Motshekga is expected to convene a meeting to consider the progress made towards the reopening of schools across the ...
News
2 years ago