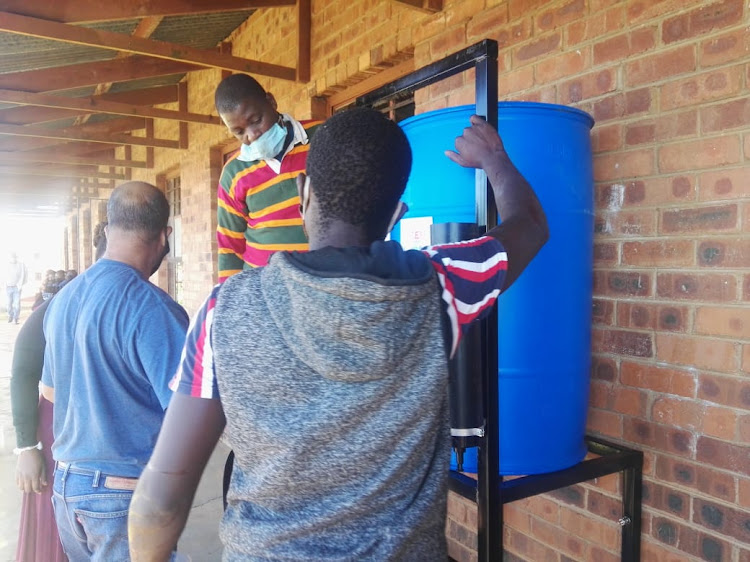 KZN education MEC Kwazi Mshengu visits Insika High School in Pietermaritzburg where he conducted an inspection on the school's readiness to open on June 8. He found that the school had no water, the septic tank had not been delivered and only one mask, instead of two, per child had been delivered.
Image: Nivashni Nair

That's according to provincial education MEC Kwazi Mshengu who was speaking at Insika High School in Pietermaritzburg, where he had investigated the school's readiness to open on June 8.

He found that the school had no water, the septic tank had not been delivered and only one mask, instead of two, per child had been delivered.

Mshengu went on to explain that the opening of school was postponed because provincial departments had pleaded with the national basic education department for more time to get schools ready to safely receive pupils during the Covid-19 pandemic.

“As all provinces we pleaded with the minister to at least give us this week to mop up everything in terms of state of readiness. We considered that we were not 100% ready. As of Friday last week, we had 4,400 of 6,000 schools ready in the province.”

Mshengu said if a school was not ready on June 8, it would not open.

“But we must also give a plan for those learners in that school so they are not left behind,” he said.

In some cases where schools are not ready, pupils may be moved to other schools. Mshengu also said most principals and teachers should be in school this week.

He explained that school management and teachers at schools that are ready should be working on orientation before the return of the pupils, while in schools that were not ready, principals should be in attendance for deliveries of personal protective equipment and sanitisers.

Mshengu said that the matric curriculum would go ahead as “normal”, while the curriculum for other grades may be trimmed to make up for the two-month school closure during the lockdown.

He said there may not be concessions made for matric pupils.

“Umalusi has said that the matric pupils are like all other matriculants, so they have to cover all the curriculum. That is why we are wanting to make sure that matrics are at school every day, because their curriculum will not be reorganised in any way. They will be assessed on the whole curriculum.

“For other grades, we have agreed that we will look into the issue of trimming and reorganising the curriculum to include the critical aspect of it, which will make us able to assess whether a learner is indeed ready to go to the next grade.”

Mshengu said there was a committee that dealt with how the curriculum would be trimmed.

“But for matriculants, unfortunately, they will have to cover the full curriculum, that's why we are discussing the issue of cancelling the holidays and having full classes on Saturdays,” he said.