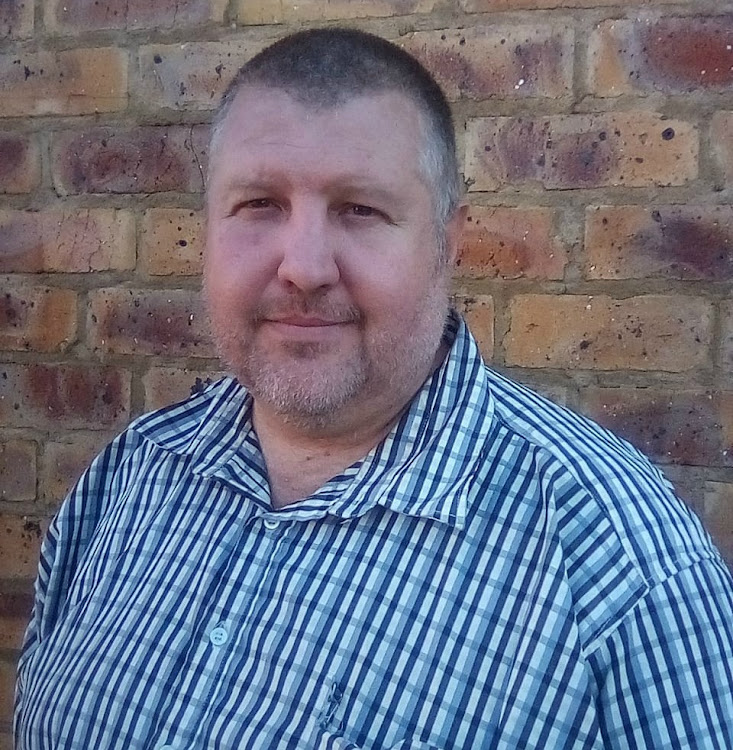 Reyno de Beer has become a household name after the David vs Goliath victory on Tuesday that saw him challenge the government’s lockdown regulations and the high court ruling that many were invalid and unconstitutional.

The father-of-two, born in Edenvale, Johannesburg, said he developed an interest in law and politics after his grade 12 studies at the then Hendrik Verwoerd High School in Pretoria in 1994.

He is the youngest of three siblings. His parents divorced in the 1980s.

De Beer, 44, describes himself as family man and a devout Christian. His wife, who is employed at a drug rehabilitation centre, is the breadwinner at home, while he volunteers for a non-profit organisation on a full-time basis.

Speaking about his childhood, De Beer recalled how he and his siblings survived on his mother’s R600 salary per month at the time. “We were not rich, barely survived but we were happy,” he said.

He recalled how his mother managed to secure a student loan for him to pursue his dream of studying a BCom Law. But it was short-lived due to a lack of finances.

He then devoted his time to reading everything about property law, with the assistance of his elder brother who, he said, groomed and mentored him “through everything”.

The pair eventually started a forum to assist people who had issues with their estate agents. De Beer gained legal experience after working as a sectional title manager.

The pair started the forum after realising there were irregularities in the property industry. He said they fought and challenged property groups, some of which eventually closed down.

In 1998, he decided to join the ANC in a bid to offer his expertise and grow the movement. He described his stay there as dramatic as he was often perceived to be a potential traitor.

Years later, he said he took a stab at joining the EFF which ultimately failed, after he allegedly experienced racial discrimination at the national level.

It was after these two experiences in the political party environment that he saw a need to establish an alternative platform “for all” that would not discriminate on any basis.

Liberty Fighters Network was founded in 2015 as a result.

A vast majority of South Africans approve of President Cyril Ramaphosa's handling of the Covid-19 pandemic, despite growing hunger, loss of human ...
News
1 year ago

De Beer, president of the organisation, works there as a full-time volunteer helping scores of people with legal issues around tenants, evictions and sectional titles.

The organisation took a bold step and challenged the constitutionality of the lockdown regulations after being approached by several concerned and affected citizens. Their complaints ranged from unlawful arrest to being unable to make ends meet or put food on the table because of the restrictions.

De Beer said the regulations had been inhumanely implemented and were in violation of people’s rights.

“The government treated people like children and it’s the poorest of the poor who suffered the most,” he said.

Judge Norman Davis on Tuesday suspended his declaration invalidating the regulations for 14 days, giving the government time to “review, amend and republish regulations” that were consistent with the constitution.

De Beer described the victory as long overdue, but it appears the fight is far from over. The government has confirmed that it intends to appeal against the ruling.

“The government has the audacity to appeal this judgment. They are totally disrespecting the people,” he said.

De Beer said the government had not yet submitted a formal application, but only submitted a “dysfunctional affidavit” which would be challenged and the legal battle would continue.

“We will continue fighting for the people of SA,” he said.

De Beer said the response to the ruling had been positive, but there had been a few critics who had suggested the organisation had hoped to make financial gain from it.

He maintained the organisation was a not-for-gain voluntary association fighting for the right to equal justice for all.

De Beer said he drew strength from his religion and family. He was confident they would emerge victorious even in the second round of litigation when the matter returns to court.

A special sitting of the cabinet resolved on Thursday to appeal this week’s North Gauteng High Court judgment which found the country's level 4 and 3 ...
Politics
1 year ago

The Pretoria high court judgment which has declared lockdown levels 3 and 4 regulations invalid and unconstitutional, lacks specific detail on the ...
News
1 year ago