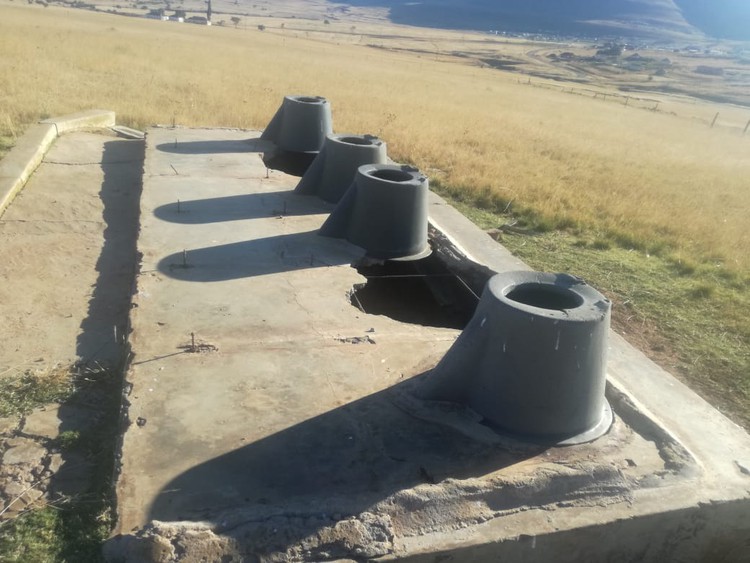 In October 2018, GroundUp reported that department officials had visited the school and instructed teachers to break down all the old pit toilets, built more than 30 years ago. The officials, however, did not say when new toilets would be built.

According to department spokesperson Loyiso Pulumani, the project to build toilets at Mvuzo has been allocated to Mvula Trust under the Accelerated Schools Infrastructure Delivery Initiative (ASIDI), which aims to eliminate school infrastructure backlogs.

Pulumani said the assessments for the project were yet to be confirmed.

In a rush to resume classes last month for 55 grade 7 pupils and to limit the risk of Covid-19 infection in schools, the department delivered four mobile toilets for pupils and one for 12 teachers. The school has 309 pupils. This means 167 boys will share two toilets and 142 girls will share the other two.

When GroundUp visited the school on June 25, teachers complained that the toilets had only been cleaned once since the school reopened on June 8.

Teachers, who asked not to be named, said they only used the toilets during the first week of school because by the second week they were smelly.

“When other grades return to school on July 20, as the department announced, the mobile toilets won’t be enough to accommodate all pupils,” a teacher said. “We are getting nothing but empty promises. In 2018 when they told us to break down all the old toilets, we thought there was a plan to build new toilets, but nothing. We use the open field. Every morning before coming to school, I always pray that I do not get a running stomach,” said a teacher.

She said when the mobile toilets were delivered, staff were told the toilets would be cleaned twice a week but that has not happened.

Pulumani did not answer questions about cleaning arrangements for the toilets.

Meanwhile, at Mcumngco Junior Secondary School, also in Cofimvaba, teachers say they have lost hope of ever getting proper toilets from the department. The school was built in 1976 and the toilets have never been upgraded.

GroundUp first visited the school in December 2015. The toilets were full and walls were broken.

The department then promised to build toilets for the school, but this never happened.

Two temporary toilets were recently donated to the school and are shared by 12 grade 7 pupils. This school has close to 150 pupils starting from grade R. When other grades return to school later this month, the toilets won’t be enough, teachers said.

“Every year the school principal tells us the department has promised to build the toilets. My fear now is that teachers will lose interest in teaching here and want to go to schools with proper structure and better toilets,” said Galada.

Pulumani said the first phase of the plan included the delivery of two mobile toilets per school.

“These are being increased to four units per school and servicing is ongoing. In the meantime the permanent sanitation programme continues as well as the ASIDI,” he said.

Eastern Cape Equal Education organiser Itumeleng Mothlabane said that in recent engagements with the department, it had been revealed that 508 schools are without any sanitation and 1,598 schools still use pit latrines. He said this conflicted with an earlier response to a written question to Parliament on April 9 2020, when basic education minister Angie Motshekga said the figure for schools in the province with only pit latrines was at 1,497.

Mathlabane said these figures were also inconsistent with the statistics in the 2018 Norms and Standards compliance progress report, in which the department had reported that only 53 schools in the province had no form of sanitation and that the majority of those schools were to be rationalised.

“Another stumbling point for the Eastern Cape schools' infrastructure has been the implementing agents who receive money from the department and continue to fail in building schools and fixing the infrastructure,” he said.

While other provinces grappled with the reopening of schools, the Eastern Cape education MEC was embroiled in a messy legal fight over loos
News
1 year ago

The SA Democratic Teachers’ Union has asked the provincial education department to shut all Eastern Cape schools because of “perpetual ...
News
1 year ago

Parents shut 'unsafe' schools over lack of hygiene and sanitation

It was like a scene from a wrestling match as parents wrangled with a security guard for the keys to the gate during a protest about the lack of ...
News
1 year ago