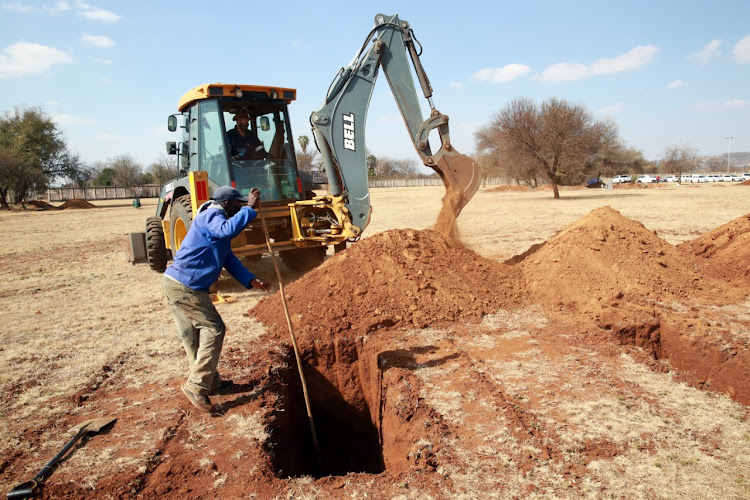 The number of excess deaths from natural causes has risen to 17,090, according to SA Medical Research Council (SAMRC) analysts.

How the number of deaths in SA is continuing to outpace expectations based on previous years.
Image: Medical Research Council

The largest burden of excess deaths is being borne by people over 60, who account for 11,175.

“The sharp increases noted in the previous report in Gauteng and the Eastern Cape have continued,” said the council's Debbie Bradshaw, Ria Laubscher, Rob Dorrington, Pam Groenewald and Tom Moultrie. 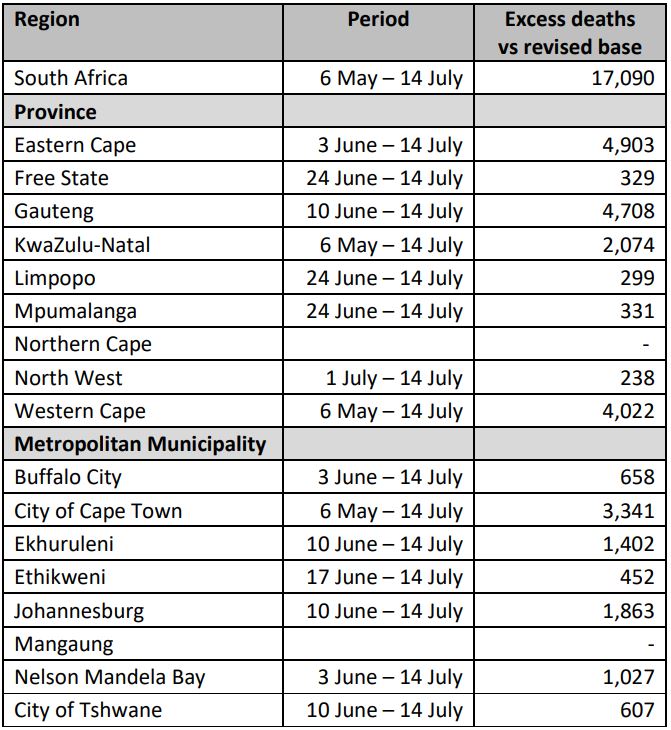 “Compared with the predicted number of natural deaths from historical data in the week ending July 14, the Eastern Cape had 116% more, Gauteng had 117% more, the Western Cape had 57% more and KwaZulu-Natal had 49% more.

“Of the provinces without metropolitan areas, Mpumalanga, Free State, Limpopo and North West have also started experiencing an increase in the excess number of natural deaths, ranging from 238 to 331.

“The number of deaths from unnatural causes (such as road traffic fatalities and homicides) was 20% below the predicted number for the week ending July 14.”

Excess deaths reported by the council include those directly attributable to Covid-19 and those that occurred from other natural causes that could not be treated or prevented because people were afraid to seek care, or because there were constraints on health services.

In its latest weekly report on Wednesday, the council estimated excess deaths totalled 5,022 in the week ending July 14, when there were only 746 official Covid-19 deaths.

BusinessLIVE reported that the gap is not unique to SA: around the world, official Covid-19 death reports generally underestimate the true extent of the disease as they only reflect deaths in facilities where patients have been tested.

Many countries are tracking excess Covid-19 deaths by comparing the number of natural deaths in a given period to a recent historical average.

However, the council said it had used a lower baseline for comparison than the historical average to take account of the marked decline in deaths observed before Covid-19 fatalities were significant.

“We entered a very severe lockdown relatively early in the epidemic, which resulted in a decline in both unnatural and natural deaths. Thus instead of being at, or close to, the expected numbers of deaths when Covid-19 deaths started rising rapidly, the numbers of all-cause deaths were significantly below the expected number,” he told BusinessLIVE.

“Using the standard approach would have produced excess deaths below the confirmed number of Covid-19 deaths for several weeks before Covid-19 deaths made up the shortfall.”

The council's analysis used death records from the national population register, maintained by the department of home affairs, which only covers people with an SA identity number. It adjusted these numbers to allow for deaths not recorded.

The report excludes deaths below the age of one year, because babies that die before their births are registered with home affairs are not recorded in the population register. Home affairs offices were closed during lockdown level 5 and those in hospitals remain closed.

Excess deaths during the Covid-19 pandemic have reached 10,994 according to the latest weekly estimate from the Medical Research Council
News
1 year ago

Excess deaths almost 7,000 since May and still accelerating, say experts

SA recorded almost 2,500 excess deaths in the first half of the year, according to the latest Medical Research Council estimates.
News
1 year ago