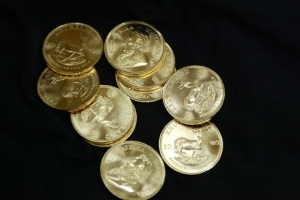 The goods were attached during a raid in October on the Hyde Park, Johannesburg, house of Sadiqi's girlfriend, Melinda Busi Dube.

This was revealed in papers filed at the Pretoria high court by Sadiqi who lives in Sandton in Johannesburg.

He claims: “Sars unlawfully, without justification and without my permission and against my protests seized from me and dispossessed me of gold (Kruger) coins that I had with me at the time ... conservatively estimated, the gold coins that were stolen from my possession are valued at over R600m.”

According to court papers, the Sars forfeiture unit raided Dube’s house on October 26. Dube filed a police report against Sars and later took the revenue service to court.

Now Sadiqi has approached the high court to be included in Dube's case because he claims the forfeited gold belongs to him.

“My involvement in the events of the day on which the illegal Sars raid took place, and the fact that the raid was illegally perpetrated on me and the companies with which I am associated with, render it essential that I be allowed to make common cause with her application,” he said in court papers.

Sadiqi said the gold coins are part of trading stock for his African Medallion Group (AMG), a company founded in 2017. In its profile, the company claims it is “one of the most successful and trusted gold companies in the world”.

The gold coins that were stolen from my possession are valued at over R600m.

Sadiqi is no stranger to Sars. In 2010 the tax collection agency impounded his then new Rolls-Royce Ghost imported from the UK. Sars said he failed to provide proof that the car was not stolen. He bought the vehicle back at an auction in 2018.

Because of his past run-in with Sars, he appealed to the court to mediate in the broken-down relationship.

He further claimed that when Sars officials raided his girlfriend’s house they acted in an unprofessional manner. They asked about his choice of cars namely a Bentley, Rolls-Royce, Aston Martin, Ferrari, Lamborghini and Bugatti after they saw the car keys and not the cars.

“During the illegal raid, Sars repeatedly questioned my decision to drive my BMW motor vehicle (which I generally drive every day) and expressed severe disappointment to the fact that I was not using one of my luxury motor vehicles,” he said.

Through his lawyers, William Wilcock Inc., Buyanga claimed he tried in vain to arrange a meeting with Sars and be given details as to what the revenue collector needed to clear up the matter.

“My legal representatives, have on no less than two occasions (October 28 2020 and November 4 2020) officially extended written invitations to the officials of Sars to meet with their investigators and to address and answer all questions they might have,” he said in court papers.

Sars is yet to respond in court.

This will be the first of R40bn in tax increases government seeks over the next four years.
Politics
5 months ago

Trio who allegedly defrauded Sars of R8.2m in court

Two men were released on bail while a third accused, a woman, was released on warning after they were charged with allegedly submitting fraudulent ...
News
5 months ago

Man who defrauded Sars of R1.7m sentenced - a decade after the fact

A Limpopo man who defrauded Sars of nearly R1.7m was sentenced to an effective four years in jail in the Mankweng regional court on Wednesday.
News
5 months ago
Next Article