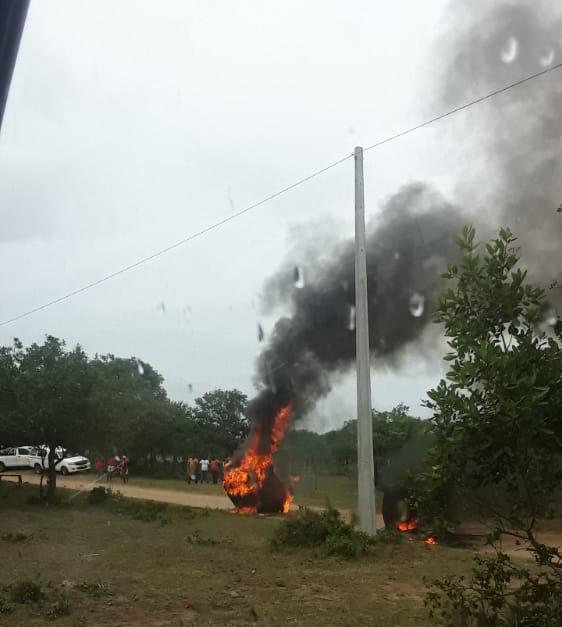 Angry members of a community in northern KwaZulu-Natal allegedly beat six men — one to death — and set two vehicles alight after a robbery at a primary school in Jozini on Sunday night.

“The community mobilised and managed to apprehend six suspects aged between 24 and 43.” Gwala said the men were assaulted by the community and one, aged 35, died at the scene.

“The other five suspects were handed over to police with assault wounds. One of the suspects was found with a licensed firearm.

“The community set alight the two vehicles that were used by the suspects. It was then established that the primary school in KwaJobe had been broken into. The fence of the school was cut and the doors were damaged.

“Charges of murder, attempted murder, malicious damage to property and burglary were opened at Jozini SAPS.

“The police were given information about another vehicle with unknown occupants that had fled towards Mbazwana. Police at Mbazwana intercepted the vehicle with five occupants.”

“The suspects aged between 21 and 32 were then placed under arrest for burglary and possession of housebreaking implements. The investigation revealed that the computers were stolen at a school in Mbazwana. It is alleged that the fence was cut by the suspects. Police impounded the vehicle for further investigation.”

Provincial commissioner Lt-Gen Khombinkosi Jula commended the community for its fight against crime but cautioned against people taking the law into their hands.

“While we appreciate the proactive action by the community, I am also appealing to citizens not break the law by assaulting suspects and destroying property which is required as evidence,” he said.

G4S vehicle blown up during cash-in-transit heist near Pretoria

The police are searching for about 15 people suspected to be involved in a cash-in-transit robbery on Paul Kruger Street in Wonderboom, Pretoria, on ...
News
1 year ago

Bheki Cele urges police to use 'deadly force' on criminals

"Do not smile when a criminal pulls a gun because that gun is not going to produce a picture. There is no selfie from a firearm."
News
1 year ago