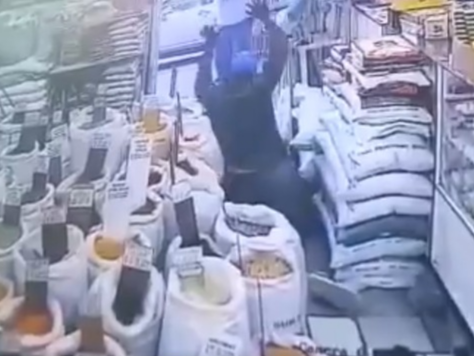 One of the robbers drops his firearm on the floor and surrenders to waiting police.
Image: Yusuf Abramjee/Twitter (screengrab)

Gunmen who threatened staff at a supermarket in Pretoria threw their hands in the air after being caught by surprise in mid-robbery by the police who were waiting at the front door.

Two of the suspects were arrested, one of them wounded, as they tried to exit the store in Marabastad late in the afternoon on Wednesday.

Alert cops foiled a robbery in Marabastad Pretoria today. One suspect was shot and wounded. pic.twitter.com/dl7brNOOWS

“A Pretoria central patrol vehicle was alerted, and swiftly responded to the scene. When these suspects noticed police, they fired shots. In the process, one suspect was shot and was taken to hospital under police guard where he is in a stable condition,” said Selepe.

The third suspect managed to flee with an undisclosed sum of cash and cellphones.

“During the arrest police confiscated two firearms and ammunition, which will be taken for ballistic assessment to establish if the firearms were used in other serious crimes.

“The two suspects will appear in court for business robbery, assault, possession of unlicensed firearms and possession of ammunition.”

Video footage of the arrests was shared on social media. Some observers questioned why the police were not wearing bulletproof vests.

Robber sentenced for accomplices' deaths in shoot-out with Durban homeowners

A 33-year-old e-hailing taxi driver was sentenced to 20 years behind bars for his role in a robbery that led to the death of two of his accomplices ...
News
1 year ago

Brazen barber shop robber cut down to size by police

Two robbers helping themselves to the personal possessions of barber shop clients and staff in Nyanga, Cape Town, had their plans derailed.
News
1 year ago

Police seized a pistol from the injured suspect and explosives from the vehicle.
News
1 year ago