Vaccines could be available to teachers within a week, KZN health head tells education counterpart 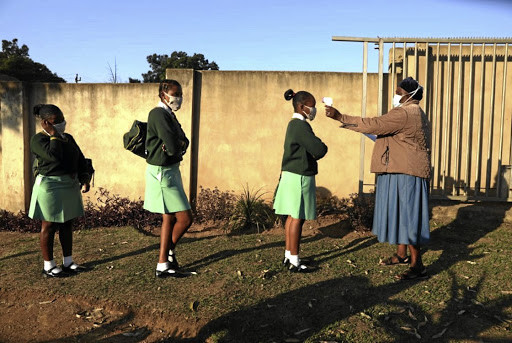 Teachers could qualify for the Johnson & Johnson vaccine within the next week, according to a letter written by the KZN health department head to his education counterpart.
Image: Sandile Ndlovu

Speculation is rife that an announcement by the basic education department on the vaccination rollout programme for teachers is imminent.

This follows a letter by the head of department for health in KwaZulu-Natal, Dr Sandile Tshabalala, to the provincial head of education, Enock Nzama, informing him that the national department of health had confirmed that the Johnson & Johnson vaccine will be available within the next week — “most of which should be used for educators”.

According to the letter, the target group is basic education, a reference to all staff members from primary and secondary schools.

“It is expected that the dedicated vaccination sites for educators will be ready by Wednesday [June 9] and the vaccination period will be two weeks,” the letter reads.

Tshabalala asked departmental co-ordinators in the health department to avail themselves for a planning meeting on Friday.

Meanwhile, Basil Manuel, executive director of the National Professional Teachers Organisation of SA (Naptosa), confirmed that they would be meeting the acting director-general of basic education, Granville Whittle, on Friday “around the vaccine issue”.

But he said he was “not aware” of the letter from the KZN health department.

TimesLIVE asked the basic education department for comment on Thursday night. This story will be updated when a response is received.

Meanwhile, basic education minister Angie Motshekga said on Tuesday after receiving her jab that “the minister of health [Zweli Mkhize] has committed that as soon as he gets certainty regarding the availability of the vaccines, he will prioritise front-line workers”.

“Whether it's on a certain date in June, we hope so, but I can't commit myself here and say we have agreed on this date with the minister,” said Motshekga.

Teacher unions have called for teachers to be prioritised for vaccinations.

Manuel said this week that vaccinating teachers will encourage other people to join the queue because “we are community leaders”.

“The vaccination of teachers settles the mind of parents,” he said. ​

The minister said the vaccination of teachers and other frontline workers will depend on the availability of vaccines.
News
11 months ago

Back to primary school daily on July 26, but not in Covid-19 ‘hotspot’ areas

SA primary schools in areas falling under alert levels 3 (hotspot) and 4 (high-risk hotspot) will have to continue with rotational classes.
News
11 months ago

With primary school pupils returning on a full-time basis from next month, teacher unions have asked to be prioritised for Covid-19 vaccination.
News
11 months ago