‘He knows it wasn’t the right thing to do’: Former owner of Corsa with trolley instead of back wheel speaks 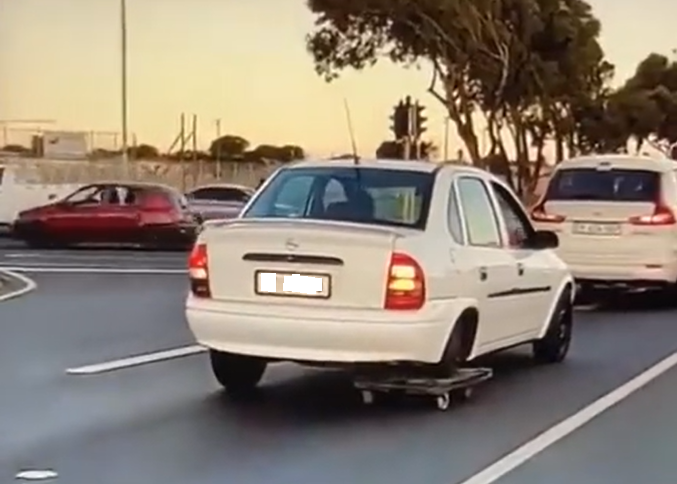 A car using a flatbed trolley as a back wheel was caught on camera driving through traffic in Cape Town this week.
Image: Twitter/@NalaThokozane

A mixture of shock, outrage and incredulity met video footage this week of a Cape Town motorist driving an Opel Corsa with its back right wheel replaced with a flatbed trolley.

The car’s previous owner gave TimesLIVE context to the video, which has been viewed 219,000 times on Twitter.

No one, absolutely no one.

The former owner, who apparently sold the white Corsa to a man from Delft, said after he saw the video he contacted the car’s current owner to find out how the four-wheeled car he sold the man only a few months ago had turned into an apparent death trap.

“I went and confronted him myself. I said, ‘No, my friend, that car is still in my name and you’re making trouble like this,’” said the man, who is not named to protect his identity.

“He said he didn’t have a choice. He had to do it. He knows it wasn’t the right thing to do and he was wrong,” said the man.

He said when he sold the car, he told the new owner he had six months to transfer the car into his name.

As to how the car ended up mounted on a trolley, the former owner said he received a vague and troubling report.

All four wheels were there when I sold it to him. He said something about a bearing which broke. They put in a new bearing and then one also broke. Then they had no other choice but to do that. That’s the story he told me.

Former owner of the Corsa

“All four wheels were there when I sold it to him. He said something about a bearing which broke. They put in a new bearing and then one also broke. Then they had no other choice but to do that. That’s the story he told me.”

He was told the car is at the new owner’s house, somewhere in Delft, where it was allegedly being fixed.

The former owner said he had not received queries from traffic police about the video.

The video on Twitter was uploaded by @NalaThokozane on Tuesday with the description “No one, absolutely no one. South Africans.”

Some declared the country needed to be “closed”.

One user hypothesised SA may be an advanced computer simulation, a test bed where nothing was too ridiculous to attempt.

Another Twitter user, afraid this act may damage SA’s international standing, suggested that Bellville, the suburb in which the number plate is registered, is another country.

Another video, which first surfaced online in November, was reposted in reaction to the Corsa video. It shows a green VW Golf using a shopping trolley as a back wheel — proving lawlessness may be a more widespread South African problem and not isolated to a single suburb.

This is becoming a norm in South Africa.🙆 pic.twitter.com/1Q2GCSRF2u

City of Cape Town mayoral committee member for safety and security, JP Smith said he could not place the exact location of the vehicle in the metro.

“So it could be that the vehicle is being driven elsewhere in the country, but certainly had the officers observed this transgression they would have acted on it.

“This does present one an opportunity to remind the public of the 24-hour emergency call centre number for them to call if they observe any transgressions of traffic regulations bylaws or any other criminal matters to allow our staff to act efficiently: 0214807700,” he said.

In this weekly segment of bite-sized chunks of useful information, consumer journalist Wendy Knowler summarises news you can use.
News
6 months ago

A young family lost their lives on Saturday in a late night head-on collision in Kimberley.
News
6 months ago