Deputy president David Mabuza would be taking over "all responsibilities" for the next week, according to a statement from The Presidency 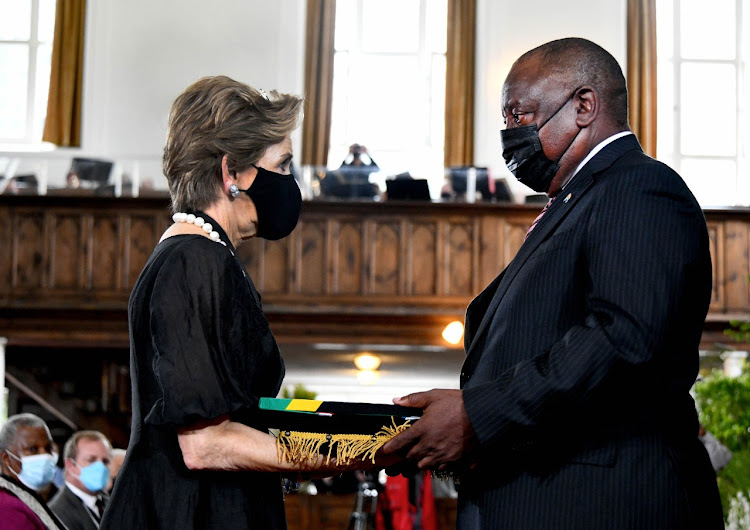 President Cyril Ramaphosa with Elita de Klerk, the wife of the late FW de Klerk, at the former deputy president's memorial service in Cape Town on Sunday. Ramaphosa confirmed on Sunday night that he had tested positive for Covid-19.
Image: GCIS

Deputy president David Mabuza would be taking over "all responsibilities" for the next week, according to a statement issued shortly after 10pm.

"The president is in good spirits but is being monitored by the South African Military Health Service of the South African National Defence Force. The President, who is fully vaccinated, is in self-isolation in Cape Town and has delegated all responsibilities to deputy president David Mabuza for the next week."

According to the statement, Ramaphosa was tested for Covid-19 in all of the four countries he visited on his recent tour to West Africa.

"The president and the delegation returned to SA from the Republic of Senegal on Wednesday, December 8, after obtaining negative test results. The president also tested negative on his return to Johannesburg on December 8," the statement said.

It added that Ramaphosa believes his infection "serves as a caution to all people in the country to be vaccinated and remain vigilant against exposure".

SA recorded 19,018 new Covid-19 cases and 20 deaths in the past 24 hours, the National Institute for Communicable Diseases said on Friday night.
News
6 months ago

NICD says that "IT challenges" resulted in more than 19,000 cases not being recorded in recent days, with them now being added to the total.
News
6 months ago

The SA Football Association (Safa) has postponed its Congress from Saturday due to a number of delegates who would have attended having tested ...
Sport
6 months ago