The party also called on the provincial education department to review its system to allow for parental choice when picking schools for their children. 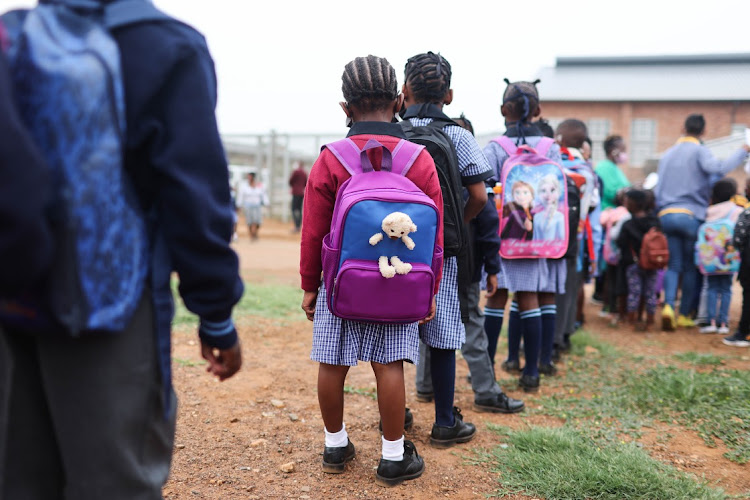 Grade 1 pupils line up before being led into class for the first time at Setlabotjha Primary in Sebokeng on January 12 2022.
Image: Alaister Russell/Sunday Times

The DA in Gauteng says it’s concerned about the number of pupils in the province who have not yet been placed in schools.

Inland provinces, including Gauteng, started the 2022 academic year on Wednesday, but this was not without frustration for parents whose children are still not placed.

DA shadow education MEC Khume Ramulifho attributed the backlog to failure by the department of infrastructure development to build more schools timeously, despite having a sufficient budget.

Ramulifho said the DA will write to Gauteng premier David Makhura to ask him to withdraw school infrastructure projects from the department.

“This is denying our learners an opportunity to learn and access quality education that will enable them to either study further or seek employment opportunities after completing school,” said Ramulifho.

The party also called on the provincial education department to review its system to allow for parental choice when picking schools for their children.

“The education department must review the online admission system to ensure that it guarantees parental choice. The current system places children far from their home and place of work of their parents,” said Ramulifho.

The minister said regulations will remain in place to ensure the safety of staff, pupils and teachers and minimise their chances of contracting and ...
News
4 months ago

MEC Panyaza Lesufi on Wednesday said the department was working around the clock to ensure the placement of 700 pupils.

“I want to assure parents the 700 we need to place, as the department, we are putting a firm commitment that we will place them before the end of January.”

Last year, more than 35,000 children remained in limbo and were only fully placed in March.

Lesufi said the backlog was not due to a lack of schools but rather school preferences by parents and migration to Gauteng.

“The reality is there are certain schools that parents prefer and therefore clog the system with those particular schools ... We have a phenomenon called ‘choice’ and we also have something that is beyond our control where hundreds and hundreds of learners prefer to come to Gauteng to learn,” said Lesufi.

‘Nothing wrong with the system’

Basic education minister Angie Motshekga said there was nothing wrong with the online system, which has been in place since 2016.

She said the department will ensure children are placed and urged parents to allow for their children to be placed wherever there is space.

“We know it can’t be comforting for parents to watch other children going to school while their child is yet to be placed. By law, we are responsible and will do so. However, we urge parents to work with and allow provinces to place pupils where there is space,” she said.

IN PICS | Gauteng pupils mark first day of school in 2022

"It just feels like yesterday when you were born."
TshisaLIVE
4 months ago

Back-to-school blues in some parts of SA

The first day of school on Wednesday was not a memorable one for almost 800 pupils in Mpumalanga who were forced to resume lessons in mobile ...
News
4 months ago