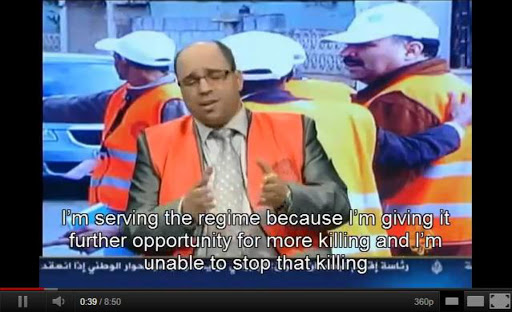 A screen grab from YouTube of Arab League observer Anwar Malek speaking to Al Jazeera on why he left Syria in disgust.

An Arab League observer has left Syria, accusing the authorities of committing war crimes and turning the Arab monitoring mission sent to check its compliance with a peace plan into a “farce”.

“They didn’t withdraw their tanks from the streets, they just hid them and redeployed them after we left,” Anwar Malek told Al Jazeera English television at its headquarters in Qatar, still wearing one of the orange vests used by the monitors.

“The snipers are everywhere shooting at civilians. People are being kidnapped. Prisoners are being tortured and no one has been released,” the Algerian former observer said. “Those who are supposedly freed and shown on TV are actually people who had been randomly grabbed off the streets.”

The Arab League monitoring mission, now about 165 strong, began work on December 26. Its task is to verify if Syria is complying with an agreement to halt a crackdown on 10 months of protests against President Bashar al-Assad in which the United Nations says more than 5 000 people have been killed.

Malek’s resignation was the latest blow to a mission already criticised for inefficiency and whose members have come under attack this week from both Assad supporters and protesters.

“The mission was a farce and the observers have been fooled,” Malek said. “The regime orchestrated it and fabricated most of what we saw to stop the Arab League from taking action against the regime.

“What I saw was a humanitarian disaster. The regime isn’t committing one war crime but a series of crimes against its people,” he added.

Syria has barred most independent media, making it difficult to verify conflicting accounts of events on the ground.

There was no immediate comment on his remarks from the Arab League, which decided on Sunday to keep the monitors in place at least until they report again on their mission on January 19.

Under the Arab peace plan, Syrian authorities are supposed to stop attacking peaceful protests, withdraw troops and tanks from the streets, free detainees and open a political dialogue.

Malek criticised the mission’s leader, Sudanese General Mohammed al-Dabi, already under fire from human rights groups concerned about his past role in the conflict in Darfur.

“The head of the mission wanted to steer a middle course in order not to anger the [Syrian] authorities or any other side,” said Malek, who had earlier drawn attention for critical comments he posted on Facebook while still in Syria.

A United Nations official told the Security Council on Tuesday that Syria had accelerated its killing of protesters after the Arab monitors arrived, the US envoy to the United Nations said.

“The under-secretary-general noted that in the days since the Arab League monitoring mission has been on the ground, an estimated 400 additional people have been killed, an average of 40 a day, a rate much higher than was the case before their deployment,” ambassador Susan Rice told reporters in New York.

Rice was speaking after Lynn Pascoe, UN under-secretary-general for political affairs, briefed the 15-nation Security Council behind closed doors on Syria and other major crises.

Syria says it is facing a wave of “terrorism” by Islamists armed and manipulated from abroad who have killed 2 000 members of the security forces. Assad said in a speech on Tuesday that his country was the target of a foreign conspiracy.

Malek said he had seen snipers on rooftops, but that some of his colleagues had turned a blind eye.

“Some of our team preferred to maintain good relations with the regime and denied that there were snipers,” he said.

Malek also said the authorities had sent “spies and intelligence officers” acting as drivers and escorts for the monitors in order to get the information they collected, adding: “As soon as we left an area they attacked people.”

He said he had spent 15 days in the rebellious city of Homs, where armed insurgents as well as protesters have been active.

“I saw scenes of horror, burnt bodies, bodies that had been tortured, people who had been skinned, children who had been killed... Houses have been shelled with heavy weapons and destroyed,” he said, citing the Bab Amro area as the worst hit.

“From time to time we would see a person killed by a sniper.

I have seen it with my own eyes. I could not shed my humanity in such situations and claim independence and objectivity.”

Malek said he had visited a political security prison and found people “in tragic conditions subjected to torture and starvation where they only eat a light meal a day”.