I killed them, I suffocated them: Tania Clarence 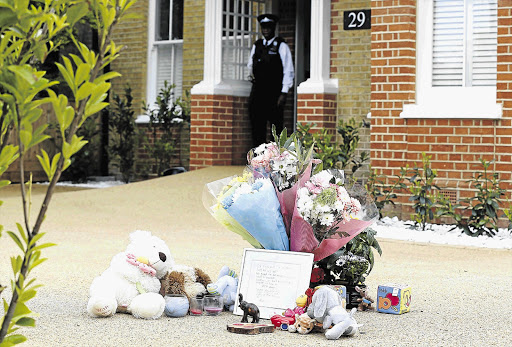 Police forensic officers leave the home in New Malden, London, where the bodies of three children were found on Tuesday. The mother, Tania Clarence, has been arrested. Neighbours left flowers and messages of support in the yard.
Image: PETER MACDIARMID

A South African mother wept uncontrollably in the dock today as a court heard how she smothered her disabled twin sons with a nappy before killing their older sister and trying to kill herself during a fit of depression.

Tania Clarence, 43, appeared before the Old Bailey in London after admitting responsibility for the deaths of Olivia, four, and three-year-old Ben and Max at the family home in New Malden, south west London, over the Easter holidays, the UK-based Press Association reported on Friday.

But after just 20 minutes of listening to details of the case, including the "grotesque" discovery of the twins' bodies, she became too upset and was excused by Justice Nigel Sweeney.

Her husband, investment banker Gary, and other family members stayed behind in court.

Opening the case for the prosecution, Zoe Johnson QC said all three of the children had suffered from the condition SMA type 2, and had the Clarences known before the twins were born prematurely on a family holiday to Portugal, they would have agreed to abort the pregnancy.

Outlining the events leading up to their deaths, she said Clarence's husband had taken their eight-year-old daughter on a holiday to South Africa on Friday April 18, leaving the defendant alone with her other children, having given a nanny a day off.

Ms Johnson said: "We suggest that the defendant took this opportunity to end the lives of her three disabled children, although it was right to say her settled intention was only formulated on the Monday." According to Clarence, the killings took place some time between midnight and 3am on April 22, Ms Johnson said. "She smothered the boys first whilst they were sleeping using a nappy so they would not smell her.

"She found it much harder to kill Olivia, and wrote a letter to her husband in the time between killing the boys and killing Olivia." The deaths were discovered later that night after the family nanny, called Jade, was phoned by Clarence's mother who had tried to contact her during the day but without success.

Accompanied by her friend Daniel Magagnin and a pastor, they let themselves into the house and found Clarence in her bedroom.

Ms Johnson said: "They got to her bedroom door and she opened the door a fraction. She was holding a towel. Mrs Clarence kept asking them to leave, and leave her alone. She was whispering.

Jade gave Mrs Clarence a hug. Mrs Clarence lay down and pulled the duvet over her. Daniel noticed blood on her wrist and called 999.

"He opened the twins' door and discovered the dead bodies of the twins. It was such a grotesque sight Mr Magagnin could not bring himself to look for Olivia as he was instructed to do by the emergency operator."

Meanwhile, the court heard Clarence handed her nanny a letter, which read: "I'm so sorry I had to do this but I could not carry on. I also could not leave the children with Gary. It would have been too much for him.

"You have been such an amazing person in our lives over the last few years. Without you I most likely would have done this a lot sooner."

By the time police arrived at the house in Thetford Road, Mr Magagnin had become hysterical as he pointed a female police officer towards the little bodies of the twins in their bed, with toys by their heads.

"I took something yesterday, but it didn't work"

Asked if she had taken anything, the court heard that Clarence replied: "I took something yesterday, but it didn't work."

Ms Johnson said that even from the light from the phone it was obvious she had tried to commit suicide as there was blood coming from her wrist.

Police were called and the neighbour checked if anyone else was in the house.

He opened the door into the children's bedroom and saw the twin boys dead, but was too shocked to continue his search of the house.

Clarence confessed to the triple killing to a female police officer at the scene, saying: "I'm sorry. I'm sorry." Asked why she was sorry, the tearful mother said: "I killed them. I suffocated them."

Clarence was taken to St George's Hospital where she was treated for a self-inflicted one-inch cut on her left wrist.

At the hospital she was told she was going to be taken to the police station, and cried out: "Why do I have to do this, I'm guilty," the court heard.

"I thought the pills would work, they didn't"

Two other notes were found in the house. One discovered on top of a pile of clothes in the master bedroom read: "Gary, I don't want to be saved please. I can't live with the horror of what I have done. I thought the pills would work, they didn't."

A third note was addressed to the nanny, who was described in court as "a significant member of the family". Its contents were not divulged.

The court heard that Clarence's husband Gary was away in South Africa and was not due to fly home until April 24.

Clarence was not at the Old Bailey to enter her plea in person, although her husband, an investment banker, has attended every hearing in the case.

Children with SMA type two have weakness in their muscles which means they cannot stand unaided, may have difficulty with other movements and are vulnerable to respiratory infections.

Although it remains a life-limiting condition, improvements in care mean that most of those affected can live long and fulfilling lives.