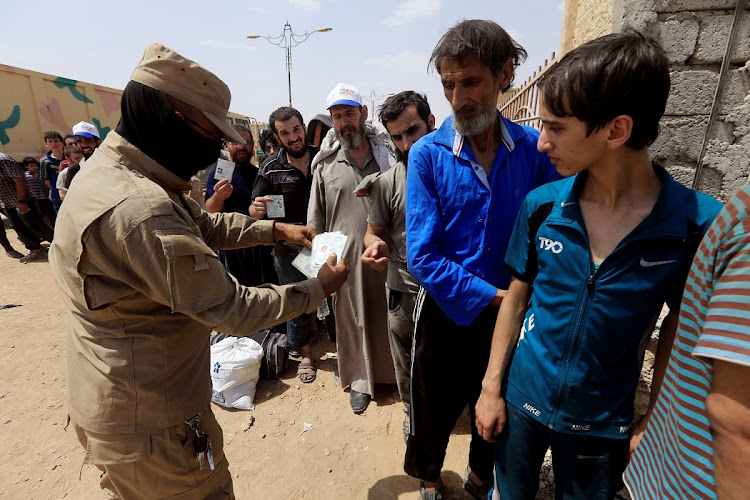 Shop-owner Adnan dragged himself from the rubble two days in a row after the houses he was sheltering in were bombed, one after the other, in the U.S.-led campaign to uproot the last Islamic State militants from Mosul.

"Daesh (Islamic State) forced us out of our home, so we moved to a relative's house nearby. Yesterday the house was bombed," he said after the army evacuated him on Monday. "We moved to my cousin's house and this morning it was also bombed."

Adnan, who has shrapnel lodged in his skull from an earlier mortar attack, said he survived, with others, by hiding in the houses' underground cellars.

Thousands of people in the last patch of Mosul still controlled by the insurgents have been huddling for weeks in similar conditions, with little food and no electricity. They fear being bombed if they remain in place and being shot by snipers if they try to flee.

Iraqi forces have pushed Islamic State into a shrinking rectangle no more than 300 by 500 metres beside the Tigris river, but slowed their advance on Tuesday out of caution for an estimated 10,000 civilians trapped there alongside the militants.

Residents have been caught in the crossfire - and often intentionally targeted by Islamic State - since the offensive began more than eight months ago. Thousands have been killed and around 900,000 - around half of Mosul's pre-war population - have been displaced.

Those in the historic Old City, the offensive's final target, have been besieged and under fire for longer than those in any other part of Mosul, and the toll is apparent.

Children are emerging bone thin and severely dehydrated, elderly people are collapsing en route. In many cases there is nothing to eat besides boiled wheat.

At a mustering point less than a kilometre from the frontline, residents rattled off the latest prices of basic goods which they said had become prohibitively expensive in the past three months: a kilogram of lentils for 60,000 Iraqi dinars ($51), rice for 25,000 and flour for 22,000.

Mohammed Taher, a young man from the Makawi area of the Old City, said Russian-speaking IS fighters spread out across the neighbourhood had impeded civilian movement.

"It was a prison," he said. "Five days ago they locked the door on us. They said, 'Don't come out, die inside'. But the army came and freed us."

A European medic at a field hospital said he has seen more severe trauma cases among civilians fleeing the fighting in the past week than he had in 20 years of service back home.

From the mustering point, camouflaged army lorries carry the evacuees across the Tigris river to a security screening centre in the shadow of the Nineveh Oberoi Hotel, a former five-star hotel which Islamic State once used to house foreign fighters and suicide bombers.

More than 4,000 people have passed through that screening centre since mid-May, said Lieutenant Colonel Khalid al-Jabouri, who runs the site. In that time, security forces have detained around 400 suspected IS members, he said.

"They are wanted so they cross with the civilians like they are one of them," he told Reuters. "In order to relieve our country from these pigs, we have to check every person who comes and goes."

Jabouri pointed out two middle-aged men who intelligence officers had pulled aside from among several dozen others for suspected links to Islamic State. One wore a traditional white robe and black headdress, the other had a shaved head and a bandage on one leg.

"That person is a Daesh member," he said, pointing at the second man. "He crossed without papers but he is Daesh. He crossed wounded or pretending to be wounded."

The number of Islamic State militants fighting in Mosul, by far the biggest city it has ever controlled, has dwindled from thousands at the start of the U.S.-backed offensive to a couple of hundred now, according to the Iraqi military.

The security forces rely on a list of names and witness testimonies to identify suspected Islamic State members. Even as the military offensive draws to a close, though, it is clear that some militants have managed to slip through the cracks.

Suspected militants are arrested on a daily basis in Mosul neighbourhoods proclaimed "liberated" from Islamic State months ago, and several suicide attacks have already been carried out in those areas.