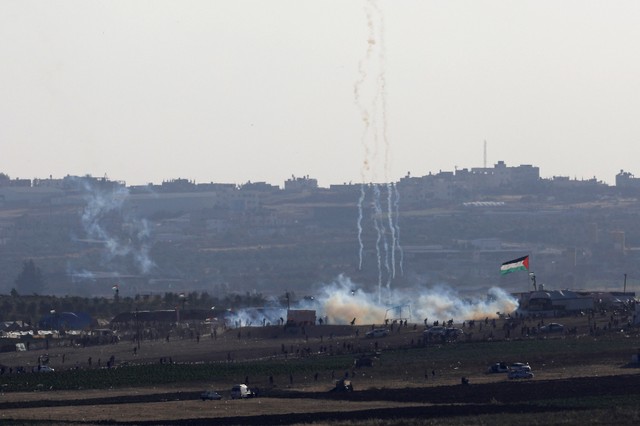 A smoke from the tear gas fired by Israeli troops can be seen from the Israeli side of the border between Israel and Gaza, at the northern Gaza Strip, May 14, 2018.
Image: REUTERS/Amir Cohen

The German government on Monday expressed sharp concern about reports that dozens of Palestinians were killed by Israeli troops in Gaza while taking part in mass protests, urging Israel to refrain from using live munitions except as a last resort.

"The right to peaceful protest must also apply in Gaza," a foreign ministry spokeswoman said. "Israel has the right to defend itself and secure its (border) fence against violent intrusions, but the principle of proportionality applies."

That meant that live munitions should only be used when other, weaker forms of deterrences had proven unsuccessful and specific threats were present, the spokeswoman added.

Israeli troops killed at least 43 Palestinians, the highest toll in a single day since a series of protests began in March.

The violence came amid mass protests against the U.S. relocation of its embassy from Tel Aviv.

Israeli troops killed dozens of Palestinians taking part in mass protests on the Gaza border on Monday as the United States opened its embassy to Israel in Jerusalem.

The U.S. relocation of its embassy from Tel Aviv fulfilled a pledge by U.S. President Donald Trump, who has recognised the holy city as the Israeli capital, but it has fired Palestinian anger and drawn criticism from many foreign governments as a setback to peace efforts.

At the embassy inauguration ceremony, Israeli Prime Minister Benjamin Netanyahu thanked Trump for "having the courage to keep your promises".

"What a glorious day for Israel," Netanyahu said in a speech. "We are in Jerusalem and we are here to stay."

Trump, in a recorded message, said he remained committed to peace between Israel and the Palestinians. He was represented at the ceremony by his daughter Ivanka and his son-in-law Jared Kushner, U.S. envoy to the Middle East.

Kushner said it was possible for both sides in the Israeli-Palestinian conflict to gain more than give in any peace deal.

"Jerusalem must remain a city that brings people of all faiths together," he said in a speech.

As the ceremony took place in Jerusalem, Palestinian protests on the Gaza border quickly turned into bloodshed 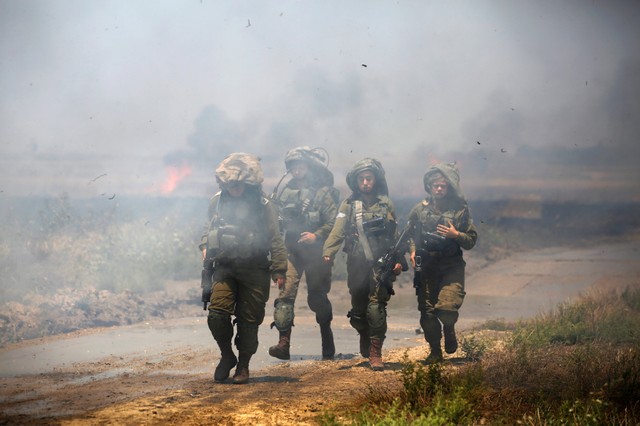 Israeli soldiers patrol near a burning field on the Israeli side of the border between Israel and Gaza, May 14, 2018.
Image: REUTERS/Amir Cohen

Israeli gunfire killed at least 43 Palestinians, the highest toll in a single day since a series of protests demanding the right to return to ancestral homes in Israel began on March 30.

The Palestinian Health Ministry said the dead included six children under the age of 18. Ministry officials said about 2,200 Palestinians were wounded, half of them by live bullets.

France and Britain called on Israel to show restraint and U.N. Secretary-General Antonio Guterres said he was "deeply concerned" by the events in Gaza.

Other responses to the violence were stronger. Regional power Turkey accused Israeli security forces of carrying out a massacre and said the U.S. Embassy move had encouraged them.

The non-government international organisation Human Rights Watch said: "The policy of Israeli authorities to fire irrespective of whether there is an immediate threat to life on Palestinian demonstrators in Gaza, caged in for a decade and under occupation for a half century, has resulted in a bloodbath that anyone could have foreseen." 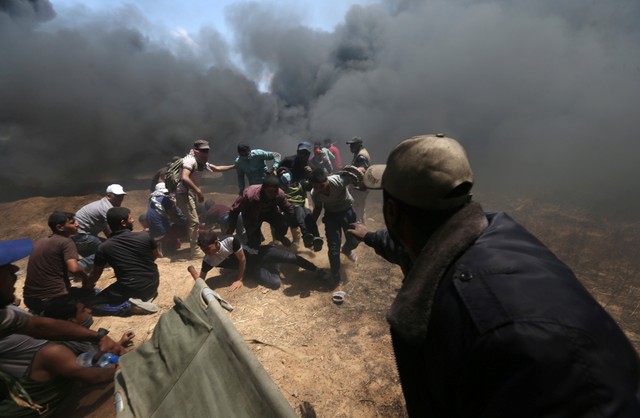 A wounded Palestinian demonstrator is evacuated as others take cover from Israeli fire and tear gas during a protest against U.S. embassy move to Jerusalem and ahead of the 70th anniversary of Nakba, at the Israel-Gaza border in the southern Gaza Strip May 14, 2018.
Image: REUTERS/Ibraheem Abu Mustafa

Tens of thousands of Palestinians had streamed to the coastal enclave's land border, some approaching the Israeli fence - a line Israeli leaders said Palestinians would not be allowed to breach.

Clouds of black smoke from tyres set alight by demonstrators rose in the air. Demonstrators, some armed with slingshots, hurled stones at the Israeli security forces, who fired volleys of tear gas and intense rounds of gunfire.

"Today is the big day when we will cross the fence and tell Israel and the world we will not accept being occupied forever," said Gaza science teacher Ali, who declined to give his last name.

Trump's recognition of contested Jerusalem as Israel's capital in December outraged Palestinians, who said the United States could no longer serve as an honest broker in any peace process with Israel.

Palestinians seek East Jerusalem as the capital of a state they want to establish in the occupied West Bank and the Gaza Strip.

Israel regards all of the city, including the eastern sector it captured in the 1967 Middle East war and annexed in a move that is not recognised internationally, as its "eternal and indivisible capital".

Most countries say the status of Jerusalem - a sacred city to Jews, Muslims and Christians - should be determined in a final peace settlement and that moving their embassies now would prejudge any such deal. Peace talks aimed a finding a two-state solution to the conflict have been frozen since 2014. 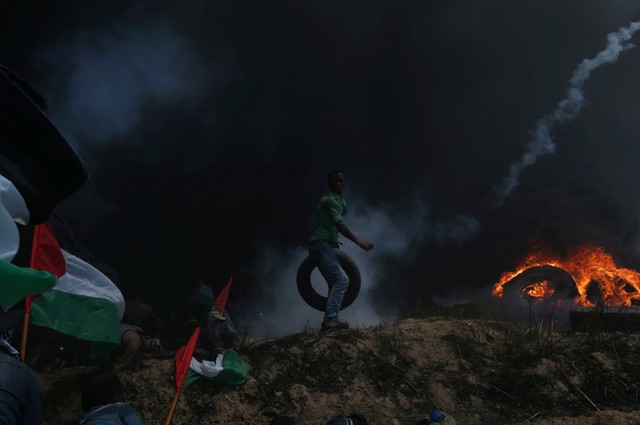 A Palestinian demonstrator carries a tire as others take cover from Israeli fire and tear gas during a protest against U.S. embassy move to Jerusalem and ahead of the 70th anniversary of Nakba, at the Israel-Gaza border in the southern Gaza Strip May 14, 2018.
Image: REUTERS/Ibraheem Abu Mustafa

The Palestinian dead on Monday included a medic and a man in a wheelchair who had been pictured on social media using a slingshot. The Israeli military said three of those killed were armed militants who tried to place explosives near the fence.

The latest casualties raised the Palestinian death toll to 88 since the protests started six weeks ago, the worst bout of bloodshed since the 2014 Gaza war. No Israeli casualties have been reported.

Thousands of people approached the barrier as the protest unfolded, some rolling burning tyres and hurling stones. Others flew flaming kites to try and torch bushes on the other side and distract Israeli marksmen. Hundreds of Palestinians were treated for tear gas inhalation.

"The IDF (Israel Defence Forces) will act forcefully against any terrorist activity and will operate to prevent attacks against Israelis," the military said in a statement.

Throughout the day sirens of ambulance vehicles carrying casualties to hospitals were almost non-stop. In Gaza mosques, loudspeakers mourned the dead, who carried for burial in funeral marches.

The killings have drawn international criticism since the the series of protests began but the United States has echoed Israel in accusing Gaza's ruling Hamas movement of instigating violence, an allegation it denies.

More than 2 million people are crammed into the narrow strip, which is blockaded by Egypt and Israel.

The Trump administration says it has nearly completed a new Israeli-Palestinian peace plan but is undecided on how and when to roll it out.

Palestinian Prime Minister Rami Hamdallah, in a statement on Monday, accused the United States of "blatant violations of international law".

"Choosing a tragic day in Palestinian history (to open the Jerusalem embassy) shows great insensibility and disrespect for the core principles of the peace process," Hamdallah wrote.

"France calls on all actors to show responsibility to prevent a new escalation," Le Drian said in a statement.

In London, the British government said it had no plans to move its Israel embassy from Tel Aviv to Jerusalem and it disagreed with the U.S. decision to do so. The Russian government said it feared the embassy move would increase tensions across the Middle East.

The U.N.'s Guterres, speaking to reporters in Vienna, said the Gaza blooshed showed the need for a political solution.

"There is no Plan B to a two-state solution in which Israelis and Palestinians can live in peace," he said.

The protests are scheduled to culminate on Tuesday, the day Palestinians mourn as the "Nakba" or "Catastrophe" when, in 1948, hundreds of thousands of them were driven out of their homes or fled the fighting around Israel's creation.

Israeli forces killed at least 41 Palestinians along the Gaza border on Monday as angry protesters demonstrated at the frontier on the day the United ...
News
4 years ago

Doctors are on a particularly tight schedule at Gaza's largest hospital when it comes to treating Palestinians wounded by Israeli army bullets at ...
News
4 years ago

Israeli troops shot dead two Palestinians and wounded 12 in renewed unrest on the Gaza-Israel border on Friday as a series of protests in the enclave ...
News
4 years ago