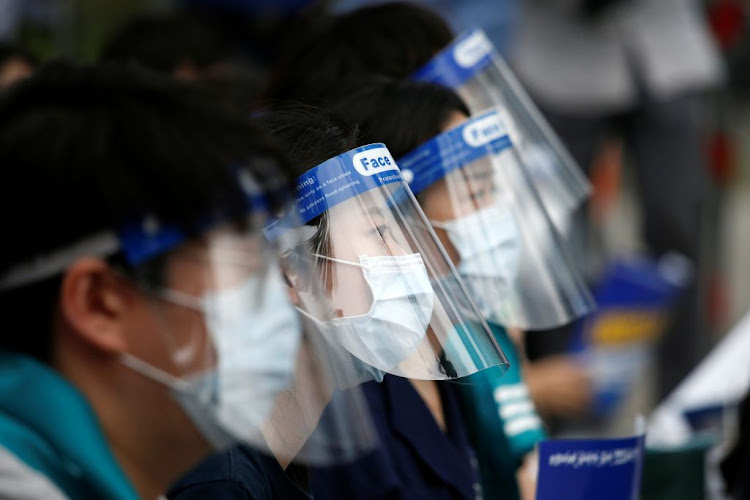 Medical residents and doctors attend a 24-hour strike amid the Covid-19 pandemic to protest a government plan to increase medical school admissions by 400 a year for the next decade to prepare for potential infectious disease outbreaks, in Seoul, South Korea, on August 14 2020.
Image: REUTERS/Heo Ran

South Korea reported 166 new coronavirus cases as of Friday, of which 155 were domestic, prompting the reimposition of tighter social distancing curbs in Seoul area as authorities worried about the spectre of a fresh wave of the disease.

For the second day in a row in over four months, the country has reported a sudden jump in locally transmitted cases, the Korea Centers for Disease Control and Prevention (KCDC) said.

The new cases took South Korea’s tally to 15,039 with 305 deaths by Friday midnight. The recent spike in infections are emerging in multiple church gatherings.

The authorities decided to upgrade the social distancing guidelines to second stage for Seoul and nearby Gyeonggi province, Prime Minister Chung Sye-kyun told a meeting on Saturday.

“We are facing a desperately dangerous situation that could lead to another wave of epidemics if we cannot overcome this crisis,” said Chung.

Health authorities had categorised social distancing rules in three stages — stage 1 being the least intense and stage 3 the toughest, where schools and businesses are urged to close.

New Zealand Prime Minister Jacinda Ardern extended a lockdown in the country's biggest city on Friday in response to the first national coronavirus ...
News
1 year ago

The French government has declared Paris and the Bouches-du-Rhone area around Marseille on the Mediterranean coast as "red" zones with a high ...
News
1 year ago

A Malaysian court jailed an Indian man for five months on Thursday for violating a home quarantine order, leading to dozens of new coronavirus ...
News
1 year ago