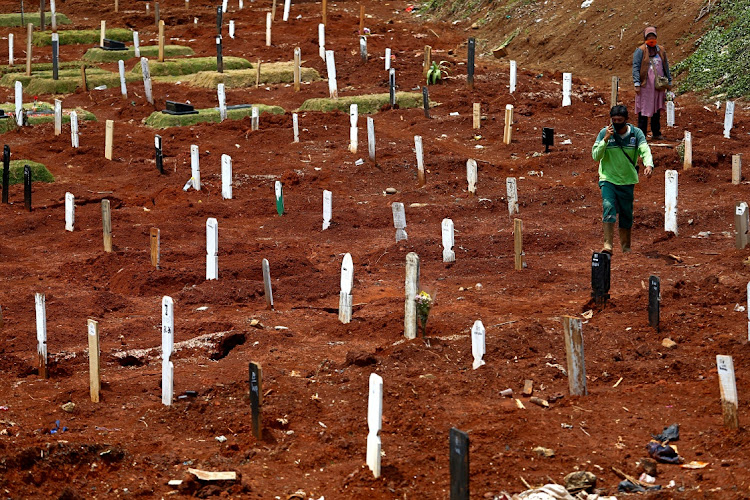 A worker walks at the Muslim burial area provided by the government for victims of the coronavirus disease (Covid-19) at Pondok Ranggon cemetery complex in Jakarta, Indonesia.
Image: REUTERS/Ajeng Dinar Ulfiana/File Photo

Burials in the Indonesian capital were 61% higher in the first 10 months of 2020 than in the past five years, according to a new study that could suggest Indonesia's real coronavirus death toll is far higher than official data shows.

The study by the Eijkman-Oxford Clinical Research Unit, which is yet to be peer-reviewed, analysed government records that showed there were more than 16,000 burials between January and October in Jakarta than the average for 2015-19 – about a half of which were suspected or diagnosed as due to Covid-19.

"After almost 10 months, the scale of pandemic is getting worse and more serious as seen from the burials data," noted Dr Dicky Budiman, an epidemiologist from Australia's Griffith University, referring to the new study.

Public health experts in the world's fourth-most populous country have long questioned the accuracy of the official statistics, particularly given that Indonesia has one of the world's lowest rates of coronavirus testing for population size.

The paper also noted the "shortfall in testing capacity likely comes with very significant underreporting of infection and its consequences" with some patients dying before being tested, or testing returning false negative results.

Jakarta, a sprawling metropolis that is home to more than 10 million people, has officially recorded more than 154,000 cases of the coronavirus as of Dec. 14, with 2,963 deaths from Covid-19 since the start of the pandemic.

A further 5,109 people were classified as 'probable' Covid-19 deaths – those presenting with severe coronavirus symptoms but who died before tests confirmed it – a figure 58% higher than official deaths.

In April, Reuters reported that a 40% spike in burial data this March indicated that deaths from Covid-19 in the Indonesian capital were likely far higher than officially reported.

Indonesia's Covid-19 national taskforce and Jakarta taskforce were not immediately available for comment on the study's findings.

Indonesia has sought emergency authorisation to start a mass vaccination campaign by the end of the year to combat the coronavirus in the ...
News
8 months ago

Indonesia recorded its first case of SARS-CoV-2 in early March, but the Eijkman paper showed that deaths began to surge in January, two months earlier, with the virus likely circulating in Jakarta in December 2019.

A year on, Indonesia has recorded more than 623,000 cases and almost 19,000 deaths, by far the most severe outbreak in Southeast Asia and one that has shown little sign of abating, with the country continuing to regularly report daily record high deaths and cases.

Based on data compiled by KawalCovid-19, an independent data initiative, as of December 13 there were 8,541 probable Covid-19 deaths nationally, an indication the true death toll could be 38% higher based on the group's findings.